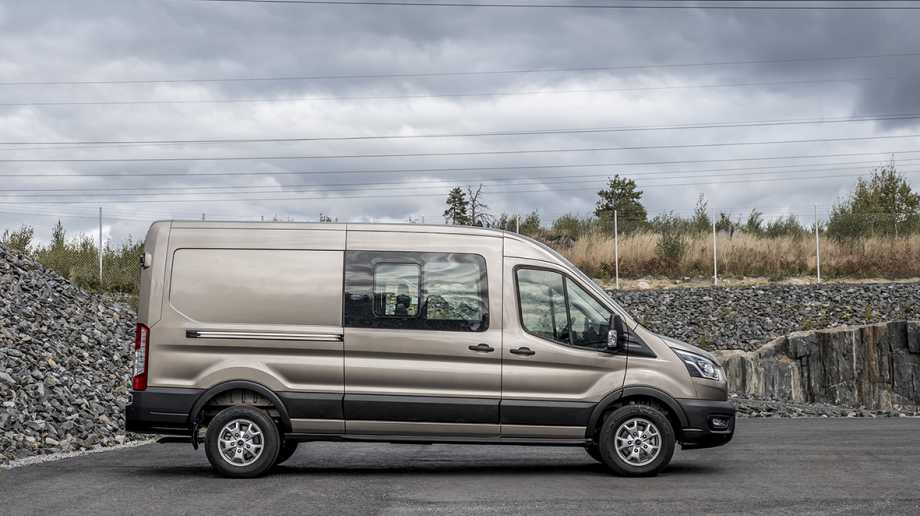 What is it?
Reinstated for a contemporary advertising campaign, Ford’s ‘the backbone of Britain’ headline used to apply to the single Transit range. Now encompassing the whole of the US fims’s passenger car and van range, the 55-year-old Transit nameplate is now applied to small, medium and large vans. The Transit Courier starts things off, followed by the Transit Connect. The one-tonne Transit Custom picks up where the original Transit left off, the model now bearing the simple ‘Transit’ badge being the much larger two-tonne vehicle on test here.

The fourth-generation Transit first appeared in 2013, but has been constantly refreshed and updated, the most recent revitalisation being in the autumn of 2019. The appearance may be familiar but a far-reaching host of upgrades – most notably applied to the powertrain – bring gains in efficiency, and the arrival of mild-hybrid technology with a brace of new diesel mHEV EcoBlue Hybrid models is a first in the van segment.

How practical is it?
The range of Ford Transit EcoBlue Hybrids starts with the ‘L2H2’ models which have a usable load length of 2,900mm and a 10m3 load capacity. Moving up through’ L2H3’ and ‘L3H2’ versions, the most commodious mild-hybrid full-sized Transit is the ‘L3H3’. With a usable load length of 3,350mm, there’s an 11.5m3 of load capacity. The largest ‘L4H3’ Transit is only available with Ford’s more efficient range of 104, 128, and 168bhp EcoBlue diesel units. The only Transit engine available in the UK with mild-hybrid technology is the 128bhp variant, but it’s worth noting that the smaller Transit Custom does have the option of the 168bhp unit on test here in the larger van.

As well as standard panel vans, there is also what Ford calls a ‘Double Cab-in-Van’, which has an extra row of seats, and is sometimes also referred to as a ‘kombi’ or crew van. In L3H2 Double Cab-in-Van specification as tested, that translates as a wheelbase of 3,954mm, an overall length of 5,981mm, 11.5m3 of load capacity, as well as a net payload of 1,043kg with a 75kg driver on board. Overall, Ford’s new full-sized Transit range comes in three load lengths with a choice of two roof heights.

How clean is it?
With the mild-hybrid technology added to its 2.0-litre EcoBlue diesel engine, Ford claims average fuel consumption savings of around three per cent, up to eight per cent in urban driving cycles. A belt-driven integrated starter/generator (BISG) replaces the standard alternator, and a 48V, 10Ah lithium-ion battery pack stores recaptured energy upon deceleration or under braking. The stored energy then provides electrical torque assistance on acceleration, as well as powering the vehicle’s electrical ancillaries, saving more fuel. An enhanced auto stop-start system brings additional fuel saving benefits when the vehicle is stationary but in-gear, and also under deceleration at speeds under 7.5mph. A comprehensive diet of weight saving has also been undertaken to improve the Transit’s efficiency (see panel), and selectable driving modes help fuel consumption further.

With all these engineering efficiencies, the Transit Trend Double Cab-in-Van MHEV L3H2 EcoBlue Hybrid has CO2 emissions of 165g/km, which equates to a CO2 reduction of 7-14g/km, depending on gearbox specification on an equivalent front-wheel drive 128bhp EcoBlue diesel engine-equipped model.

How does it drive?
Mild-hybrid mHEV versions of the new Transit look little different to their EcoBlue diesel-engined counterparts. Only an ‘EcoBlue Hybrid’ badge on the nearside rear door differentiate the 48V models. Painted in the Diffused Silver finish, the Double Cab-in-Van Transit appears an upmarket load-lugger, and the addition of another row of windows breaks up the vast expanse of side metalwork.

Inside, the cabin has been given a makeover, with the two-tonne Transit gaining the one-tonne Transit Custom’s dashboard. More driver-focused than before, there are higher quality materials (but its van origins and ‘workaday’ personality are still present) and the addition of Ford’s SYNC 3 eight-inch touchscreen technology brings increased connectivity.

On the move, the Transit mHEV feels very responsive, with initial acceleration boosted by the electrical assistance. The powertrain is smooth and free-revving, if still immediately identifiable as a diesel. However, responsive steering and slightly firm suspension ensure that, as with its passenger cars, Ford has provided the Transit with one of the most engaging driving experiences when compared to its rivals. In-cabin storage is plentiful, and the colour touchscreen in the middle of the dashboard has very clear and smooth transitions between menus.

The refreshed Transits have new FordPass Connect on-board modem technology which allows operators to maximise efficiency through a brace of apps. Aimed at small businesses, the FordPass Pro smartphone app enables management of up to five vehicles. Health, location and status of each vehicle can be checked, and an alarm notification advises of any ill-wanted activity. Designed for larger operators, the full-scale Ford Commercial Solutions telematics suite can be tailored to customers’ needs or have its data exported to third party software. To help the decarbonising and ‘greening’ of fleets, fuel and emissions reporting will appear later.

Move up the range to Trend, auto headlights and wipers, cruise control, front fog lights, an eight-inch Ford SYNC system, and a heated windscreen are added, along with parking sensors, and projector-style headlights. The Trend Double Cab-in-Van mHEV L3H2 as tested here is priced at £35,820.83. Metallic paint is priced at £650 extra excluding VAT, and 16-inch alloys are £550.

As all Transits – even with mild-hybrid technology – are diesel-engined and are not classed as low emission vehicles, they attract the standard £260 light goods vehicle VED charge.

Why does my fleet need one?
With an updated and more technology-laden cabin, the new Transit is a much more comfortable and practical place to spend time. The enhanced and comprehensive focus on efficiency has also resulted in a vehicle which is more aware of the environments in which it operates. On the whole, the improvements add up to an exhaustive re-engineering of Ford’s long-standing and much-loved commercial vehicle star. But by not removing any of the driving enjoyment that has defined previous versions, the balance Ford has struck is a very amiable one.