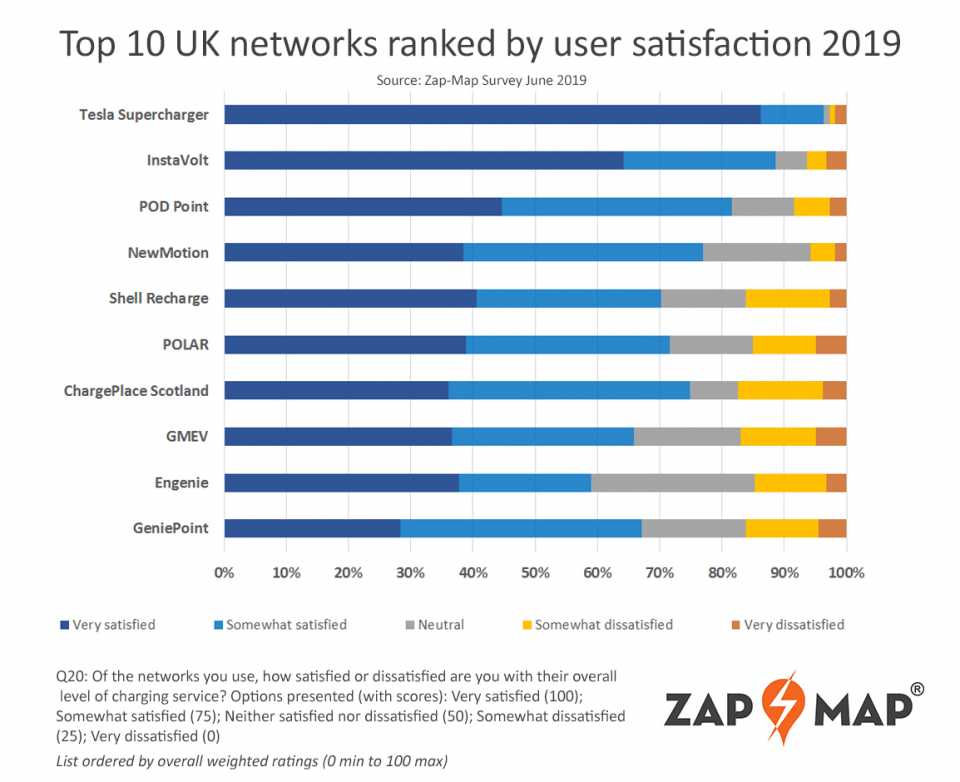 Zap-Map’s survey panel of more than 1,600 users awarded satisfaction ratings for more than 26 UK networks visited by Zap-Map users. Using a satisfaction score (0-100) based on these user ratings, the top networks identified are:

More than 86% of drivers using Tesla Superchargers report being ‘very satisfied’ and 10% ‘somewhat satisfied’ with the experience for its low charging costs (free for early adopters), reliability and national coverage.

Retaining second place for the second year running, InstaVolt leads the ranking within the wider rapid-charging market, with 64% ‘very satisfied’ and 24% ‘somewhat satisfied’ with the charging experience, respondents citing ease-of-use and contactless payments among the most positive aspects of the service.

Pod Point, whose UK-wide network includes slow, fast and rapid charge devices came third. As the third most used network within the survey sample, 45% are ‘very satisfied’ and 37% ‘somewhat satisfied’ when charging their EV on one of Pod Point’s units, with many users noting their simple-to-use operation.

While Tesla continues to lead from the front, their overall ratings slipped slightly compared to last year with a 6% fall in users reporting being ‘very satisfied’. This may be a reflection of the loss of free charging for many Tesla owners and increasing pressure on the Supercharger network as the size of the Tesla fleet continues to rise. Similarly, the percentage in Pod Point’s highest category fell by 5% – although their combined ‘satisfaction’ rating stayed level at 82%.

As the largest UK network, Polar maintains its strong satisfaction ranking in joint fifth place with 72% of users being ‘satisfied’, a reflection of its well-maintained national rapid and non-rapid service. While much smaller in its extent, Shell Recharge, which is rolling out rapid units on station forecourts, appears for the first time within the satisfaction rankings sharing fifth place.

The Zap-Map survey panel was also asked to rank four key issues related to EV charging on the public network. The results reveal that EVusers rank ‘reliability’ as the overriding consideration, with ‘speed’ a secondary factor. Charging cost is deemed to be relatively less important as are facilities available at a charging location.

Half of EV drivers worry about upcoming charge point shortage

Inquiry into impact of Clean Air Zones on freight and logistics