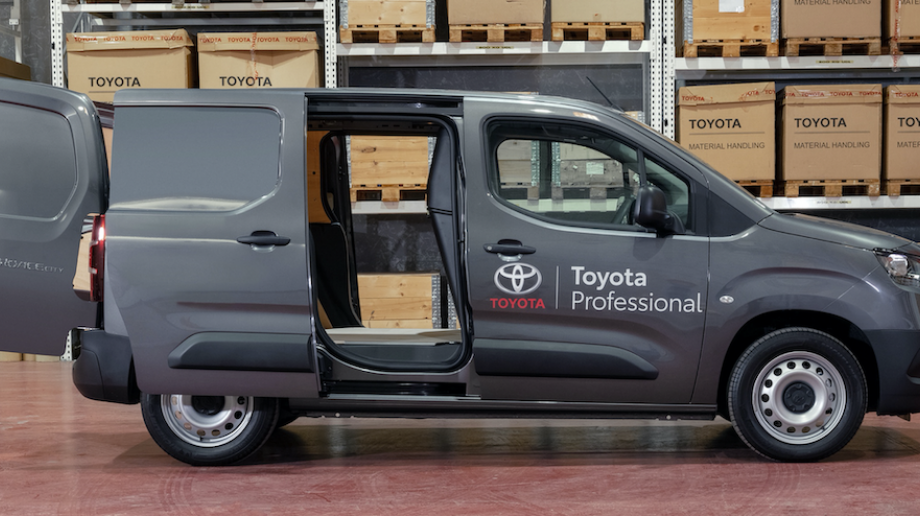 A new entrant into the compact light commercial sector, the Proace City brings a new size of vehicle to Toyota’s acclaimed CV nameplate. Richard Gooding discovers that its ease of use and practical nature should win it many friends

What is it?
If the Toyota Proace City looks familiar, there’s a good reason. The Japanese manufacturer has collaborated with the PSA Group since 2013 on commercial vehicles and the Proace City is a member of the Citroën Berlingo/Peugeot Partner/Vauxhall Combo compact light van family. The larger Proace (GreenFleet 112) adopts a similar relationship and counts the Citroën Dispatch, Peugeot Expert and Vauxhall Vivaro as siblings. The Proace City made its world debut at the 2019 Commercial Vehicle Show in the UK, with sales beginning in early 2020.

How practical is it?
The new Toyota Proace City comes in a choice of two lengths: 4,403mm ‘Short’ and 4,753mm ‘Long’. The Short van as tested here has a wheelbase of 2,785mm and a load floor length of 1,817mm, the Long version coming in with 2,975mm and 2,167mm respective measurements. The clever Smart Cargo load-through hatch (a £715 option on entry-level Active models) increases this to 3,090 and 3,440mm respectively and both vans share a 1,200mm maximum load height. Both Short and Long vans can easily accommodate a pair of Europallets.

Load volume is 3.3m3 on the Proace City Short, and 3.9m3 on the longer wheelbase model. In both cases, this is increased by 0.5m3 if Smart Cargo is specified. There’s 1,527mm of load width and the twin sliding doors offer 675mm of width and 1,072mm of height. Moving to the back, the rear doors have a maximum aperture width of 1,241mm, 1,196mm of height, and open to 180 degrees. Only available with one load height, the Proace City can swallow loads up to 1,200mm tall and maximum payloads of between 650-1,000kg depending on engine.

How clean is it?
The Proace City is available with a choice of 1.5-litre, four-cylinder turbodiesel engines, in either 74 or 99bhp outputs. The smaller output engine can only be specified as a short wheelbase model,  and has CO2 emissions of 145g/km. The more powerful unit tested here emits between 148-160g/km of CO2 and both engines are married to five-speed manual gearboxes. Toyota quotes official WLTP-certified fuel economy figures of 49.56-51.36mpg for the 74bhp engine, and 46.31-50.44mpg for the 99bhp unit. In ‘real-world’ driving conditions, our Icon Short 99bhp test van averaged 48.3mpg.

How does it drive?
While there’s no denying the external resemblance to its French and British siblings, it does the Proace City no harm, and the chiselled yet softened look suits it well. However, at the time of writing, and unlike its PSA Group siblings, it would appear that neither colour-coded bumpers or alloy wheels can be specified should you want to smarten up the Proace City’s appearance further. Metallic paint can be chosen, though, for £545 extra.

Inside, as with the Vauxhall Combo Cargo we tested in GreenFleet 126, the cabin also has a distinctly French flavour, but once again, that’s no disadvantage. The flowing dashboard has storage aplenty with up to 16 different repositories dotted around the cabin, from a small coin holder, to dash-top cup holders and a 15-litre space in the centre console. Top-trim Icon vans have an electric parking brake which frees up passenger legroom, too, providing even more space. They also receive an eight-inch colour touchscreen infotainment system as standard, which is very similar to those found in cars, lending the Proace City a car-like usability.

The brace of PSA Group and Toyota-developed vans use the same part-car-derived platform. The rear of the chassis is taken from the previous generations of the Berlingo and Partner, with the front using parts from the PSA Group’s ‘EMP2’ car platform. Shared with the Peugeot 308, 3008 and 5008 among others, the handling and ride are more car-like than ever before. Able to zip in and out of traffic easily and safely, the Proace City has good manoeuvrability and is more comfortable than a van may be expected to be. The power steering makes light work of tighter spots, and a rear view camera, and front and rear parking sensors (standard on Icon, optional on entry-level Active models), are boons to practicality. Staying with practicality, it’s worth noting that all Proace City models have three cargo lights and a solid panel-style bulkhead.

The 99bhp, 1.5-litre turbodiesel engine of our test van had good tractability, although at times the gearbox needed to be stirred to make quicker progress from low revs. There’s 184lb ft (250Nm) of torque, though, produced from 1,750rpm, which is more than enough for most instances. Engine noise is well suppressed on the move, with wind and road disturbances equally kept to a refined minimum. Testing was conducted with an empty cargo space, trimmed here with plywood, a £389 option.

What does it cost?
As with the engine choices, Toyota has kept the trim levels simple with the Proace City. The £18,390.83 (OTR, excluding VAT) Active Short kicks things off, and includes 15-inch steel wheels, automatic lights, electric windows, central locking, a four-speaker DAB audio system with Bluetooth and USB connectivity, roof rails, and a stop-start system. A host of safety kit comes as standard, which includes hill assist and stability control systems. A 99bhp Active model is also available.

Moving up to Icon brings niceties such as 16-inch steel wheels, auto wipers, cruise control,  driver’s seat height adjustment, front fog lights, power-folding door mirrors, steering wheel audio controls, and an eight-inch colour touchscreen infotainment system with Android Auto and Apple CarPlay connectivity. The 74bhp Icon Short is priced from £20,390.83, with our mid-range 99bhp version pegged at £21,015.83. The only long-wheelbase version, the Icon Long, is £21,640.83 and is powered by the 99bhp engine. Icon specification counts the flexible Smart Cargo load-through system (including a two-seat passenger bench) among its extra practical features. Toyota’s comprehensive Toyota Safety Sense system as seen on its passenger car range can also be added to its Icon models of its smallest light commercial, priced from £675.

Why does my fleet need one?
As with its PSA Group stablemates, the Toyota Proace City offers slightly more load capacity than a Ford Transit Connect or Volkswagen Caddy, and has enjoyable and easy driving manners. Based on well-proven, award-winning components, the Proace City has the best of starts. The similarity to its siblings is perhaps hard to ignore, but that translates into well considered practicality and efficiency.

A practical and likable performer, the Proace City’s enhanced warranty over its PSA relatives may swing the buying decision in its favour. Toyota offers its generous five-year/100,000-mile manufacturer’s warranty as standard on all versions of the Proace City, and added to its 25,000-mile/two-year maintenance schedules, signifies that the small Japanese van really is ready for business.