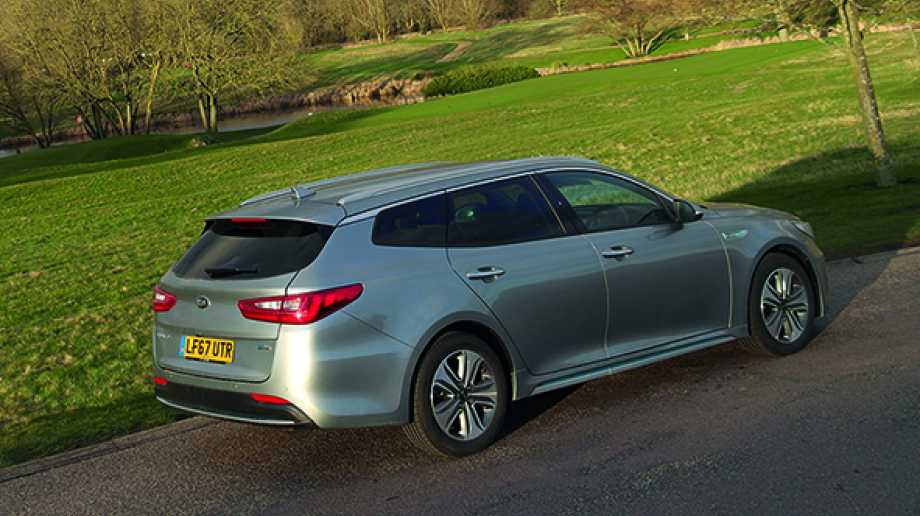 The Optima Sportswagon PHEV is Kia’s fourth alternatively-fuelled car in the UK and its second plug-in. Richard Gooding sees how it balances economy, value and practicality

The Kia Optima has been around for almost two decades, and in that time, has evolved to offer premium quality at a lower price. Initially based on the Hyundai Sonata, Kia’s D-segment challenger has also been known as the Magentis, but in 2010 officially adopted the Optima name globally. This third-generation car first introduced the idea of an Optima Hybrid in 2011, a model which is now a permanent mainstay in the South Korean manufacturer’s range.

The fourth and current-generation Optima arrived in 2016, and brought with it a plug-in hybrid (PHEV) version, complete with a 50kW electric motor and 9.8kWh battery pack, which gave up to 33 miles of zero-emission range. CO2 emissions were a commendably low 37g/km. The Sportswagon (SW) estate version debuted in 2016, with a plug-in hybrid model added to the line-up in March 2018, and it’s this car we test here.

Just with other Optimas, be they saloons or Sportswagons, the PHEV version of Kia’s load lugger has an air of handsome smartness about it. Distinguished from its non-plug-in sisters by metallic blue accents on the front grille, side sills and lower front bumper, there are ‘ECO plug-in’ badges on the tailgate and front wings. The charging port and flap is on the nearside front wing. A rear spoiler and aerodynamically reprofiled front and rear bumpers help the Optima Sportswagon PHEV cleave through the air more efficiently, while an active air grille flap helps air pass over and around the car more economically and also lowers the drag coefficient to 0.28 – 0.1 lower than the diesel-engined Optima Sportswagons.

Inside, the Sportswagon shares the standard Optima’s cabin, and it’s a very comfortable and impressive place to be. Over £35,000 may sound like a lot for a Kia, but, quality really does touch on more premium rivals, and the leather-finish dashboard and overall excellent cabin ergonomics really are up there with more expensive competitors.

At almost five metres long, the Kia is a big beast, but that means there is masses of rear legroom and an equally large boot. With the rear seats in place, there is 440 litres of luggage capacity, which rises to 1,574 litres when the seats are folded. The charging cables are stored in bags under the luggage net in the boot, take up very little room.

On the road, the Optima Sportswagon PHEV is as supremely refined as you’d expect from a petrol-electric hybrid. There’s barely any wind or road noise, and the big Kia is one of the most relaxing plug-ins to drive. Like the Hyundai Ioniq, it uses a six-speed automatic gearbox rather than a CVT system favoured by other manufacturers, which means it makes smooth progress, transferring its power to the road with little fuss. There’s a combined system output of 202bhp and 276lb ft/375Nm of torque from its 2.0-litre petrol engine, 50kW electric motor and 11.26kWh lithium-polymer battery, and Kia quotes an official 0 to 62mph time of 9.4 seconds. It doesn’t feel especially fast in ‘HEV’ hybrid mode, but it does move along nicely in ‘EV’ mode. As with other PHEVs, choose the hybrid mode for longer journeys and motorway cruises, and prioritise EV running for shorter, urban journeys.

Comfort is key when it comes to the Optima Sportswagon PHEV’s ride and handling. The additional 110kg of weight due to the battery pack has resulted in specially tuned suspension and larger brakes, but the plug-in large Kia always feels more relaxed when it’s not being hustled through the corners. Instead, it’s best to let passengers enjoy its cosseting and comfortable ride.

Kia quotes an official – and weighted – 201.8mpg on the combined cycle when using the full hybrid set-up, which of course means making judicious use of charging and plugging the car in whenever you can. Of course, driving short distances around urban areas, you may never need to start the combustion engine, and thanks to the Optima Sportswagon PHEV’s ‘ECO-DAS’ (Economy Driver Assistance System), pure electric running can be specified using the ‘EV’ mode when there is enough charge in the batteries. The big Kia has an all-electric range of up to 38 miles. During our time with the car, there was certainly enough range for an all-electric 25-mile commute.

Further ‘Eco’ and ‘Normal’ modes allow for maximum energy efficiency or more performance. A regenerative braking system puts charge back into the battery pack via the recuperation of kinetic energy, while an intelligent heating, ventilation and air conditioning (HVAC) system also
saves battery power. Similar to that in the Soul EV, it allows for only the driver’s side of the car to be heated or cooled to maximise energy usage.

An ‘HEV’ mode balances the use of the electric motor and the petrol engine for a combination of electric and internal combustion power. It prioritises the petrol engine to power the car, and constantly tops up the batteries for later use. Rather obviously, this can increase fuel consumption, though, and when solely running on petrol propulsion, Kia quotes a figure of 54.3mpg. Over 257 miles of testing – in very cold conditions – we averaged 69.1mpg.

The Sportswagon PHEV’s infotainment system shows all sorts of helpful read-outs to guide economy and the display ahead of the driver even shows a graphic which tells of ‘Economical’, ‘Normal’ or ‘Aggressive’ driving styles, as well as range left in both the battery pack and the combined petrol-electric distance.

With just the one high-end specification, the Optima Sportswagon 2.0 GDi PHEV Auto starts from £35,145 ‘on the road’. It does qualify for the government’s £2,500 Plug-in Car Grant (PiCG) discount, though, which takes the price down to £32,645. It takes equipment highlights from the diesel-powered ‘2’, ‘3’, and ‘GT-Line S’ Sportswagon models elsewhere in the range, and is therefore a very well kitted out car. Included in the price are items such as 17-inch alloy wheels, an auto-dimming rear view mirror, cruise control, an electrically-adjustable driver’s seat (with heating on both front seats), an eight-inch colour touchscreen satellite navigation infotainment system with Android Auto/Apple CarPlay/Bluetooth and USB connectivity, a wireless smartphone charger and a reversing camera.

Its low CO2 emissions of just 33g/km ensures the Optima Sportswagon attracts the lowest possible vehicle excise duty, making it particularly suitable for fleet drivers who are looking to save on both their carbon output and pocket. In the first year, the Optima SW PHEV is cost-free to tax, while in the second year and the years thereafter, the big Kia invites a £10 ‘alternatively-fuelled’ discount, which takes the cost down to £130.

Benefit in Kind is also correspondingly low at 13 per cent, compared to the 27 to 29 per cent rates of the diesel-engined Optima SWs. These are, obviously, also more expensive when it comes to VED, typically costing £205 in the first year and the same £140 as the PHEV thereafter.

The Kia Optima Sportswagon 2.0 GDi PHEV Auto is a car built to exacting standards, packing lots of useful – and fuel saving – technology. Its high levels of comfort and usability would fit into your life very easily, and its quietly handsome looks pull off the joint trick of being discreet and appealing.

A more value-driven alternative to premium-priced rivals, the plug-in Optima Sportswagon is both a relaxed and practical machine, and its lower tax implications means it’s easier on the fleet driver’s pocket, too. Kia’s seven-year/100,000-mile warranty and fixed-cost ‘Care-3’ and ‘Care-3 Plus’ servicing packages are also impressive. And that sums up the car as a whole. As a car which plays a part in Kia’s 2020 aim to lower its fleet CO2 emissions by 25 per cent, and hopes to offer a cost-effective and tempting package, it succeeds on both fronts.