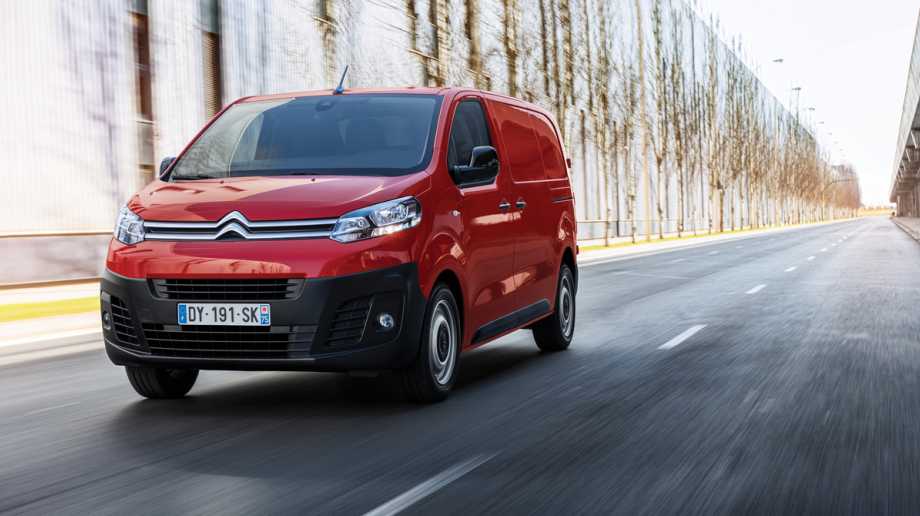 The 2016 Citroën Dispatch is the latest in a long line of light commercial luminaries from the French company, which includes the 1939 TUB (Transport Utilitaire série B) and the now‑fashionable Type H of 1947.

Launched at the 2016 Commercial Vehicle Show (GreenFleet, issue 94), Citroën’s latest medium-sized panel van has both French and Japanese relatives in the shape of the Peugeot Expert and the Toyota Proace.

Three lengths are available as well as a passenger-carrying SpaceTourer version. Aimed at fleets who desire a 1,400kg maximum load weight but find a Berlingo or similar‑sized LCV just that little bit too small, the Dispatch range starts with the new ‘XS’ variant, which is a unique offering in the light commercial sector. With an overall length of 4.6m-long and a base 4.6m3 load capacity, the new ‘compact’ Dispatch aims to offer all the versatility of a larger van in a smaller footprint.

Longer length 4.95m ‘M’ and 5.3m ‘XL’ models enjoy load capacities up to 5.8m3 and 6.6m3 respectively, and can carry one additional Euro pallet over the pair which can be swallowed by the XS. All versions have a standard height of 1.9m, which Citroën cites as a benefit for urban use where car park restrictions come into play all too often. Overall, nine body configurations are available, business users able to choose between panel van, crew van and platform cab models.

The new Dispatch is a smart‑looking light commercial, and embraces styling cues from Citroën’s passenger car ranges both inside and out. Externally, a ‘friendly’ face includes the company’s famed grille chevrons which flow into the headlights, while pronounced wheel arch styling neatly incorporates the fuel filler flap.

The 50/50 rear doors on Dispatch panel van and crew vans swing out to 250 degrees for the ultimate in easy access, while a lift-up tailgate is optional. One neat touch the French company has incorporated is an electrically‑sliding side door which can be activated by a button on the dashboard or by gesturing your foot under the rear bumper corner. This makes loading a much simpler operation and is a handy and useful touch for awkward hands-full moments.

For added practicality, the optional ‘Moduwork’ system comprises a dual passenger bench seat with fold-up outer seat, a fold-down writing table in the central seat back, as well as storage under central seat. But, most importantly, the full steel bulkhead has a load-through flap under the outer passenger seat to increase overall load length to an impressive 3.3m on XS compact models and 4.0m on XL variants.

Inside the loading area, floor and/or side loading area coverings are available in either wood or a durable non-slip coating, while crew vans enjoy both fixed or folding partition options. The second and third row of seats can be removed entirely for maximum choice between loadspace and passenger carrying capability on the crew van models.

The latest efficient Euro 6-standard BlueHDi engines are fitted to the new-for-2016 Citroën Dispatch range. A pair of 1.6-litre and 2.0‑litre units are offered, with outputs ranging from 95bhp to 180bhp. The cleanest version, the BlueHDi 115 S&S 6-speed manual, emits 133g/km, while Citroën claims economy of up to 55.3mpg. Both six-speed manual and automated gearboxes can be specified. The new engines offer reductions of up to 14g/km when compared to their Euro 5 predecessors, while a new electro-hydraulic power steering system cuts CO2 emissions still further.

All new Dispatch variants receive an Adblue and Selective Catalyst Reduction (SCR) system for ultimate environmental efficiency. The SCR module reduces up to 90 per cent of NOx emissions – and also cuts CO2 emissions up to four per cent – while a particulate filter eliminates 99.9 per cent of particulates, regardless of their size. Stop/start systems on selected models also add to the environmental credentials. Business users will also be pleased with the running costs: the new engines boast servicing intervals of 25,000 miles or two years (18,600 miles in the case of the BlueHDi 180 S&S EAT6 automatic).

The 2016 Citroën Dispatch is the third‑generation of a model range which dates back to 1995, but the latest version couldn’t be more different. As with the jointly-developed Peugeot Expert, the latest Dispatch enjoys many car-derived technologies, thanks to being based on the new PSA Peugeot Citroën ‘EMP2’ platform which underpins models such as the Citroën C4 Picasso. The car‑based subframe features at the front of the van – and offers weight savings of up to 20kg – while the rear end is bespoke LCV.

We tested BlueHDi 115 S&S 6-speed manual and BlueHDi 150 versions, and both were brisk enough for urban cut and thrust use as well as more relaxed motorway cruising. As you would expect, the higher-powered version displayed keener acceleration with its 272lb ft (370Nm) of torque (the 115 version has 221lb ft/300Nm) – ideal for those out-of‑town overtaking manoeuvres – but both were remarkably refined when cruising around the outskirts of Paris.

As with most new-technology LCVs, engine noise can be heard under acceleration, but the noise is never truly gruff like vans of old. The six‑speed manual gearbox is pleasant enough, and while the steering doesn’t offer much in the way of feedback, fleet drivers will like the positive and well-weighted feel which will allow them to exploit the 11.3-12.4m turning circle.

A car-like MacPherson-derived front suspension system gained from using the EMP2 chassis but adapted especially for the new Dispatch ensures safe handling. The variable stiffness springs and shock absorbers fitted to the rear suspension guarantee maximum comfort whether the Dispatch is loaded or unloaded, and both versions we tried certainly benefitted from a comfortable ride. Citroën claims best‑in‑class acoustic comfort levels and with the all‑steel full‑height bulkhead, there was certainly no unpleasant ‘empty’ sound from the rear load area.

There’s an altogether less van-like ambience. too. The three-seat cabin has lots of leg room, too. The Dispatch’s interior is also practical with 49 (van) and 121 (crew van) litres of storage space dotted around the dashboard and door bins. Digital functionality is enhanced by the standard USB socket.

A wide range of optional driving aid systems are available on the French newcomer including driving time, driver alert, blind spot monitoring, speed limit recommendation, lane departure warning, and parking assistance set-ups. A grip control traction system also enhances road-holding on low-grip surfaces, and while a four-wheel drive version is being marketed, it doesn’t yet appear in UK price lists. The cleanest and least expensive version is the X BlueHDi 115 S&S 6-speed manual which has a 1,000kg payload, 133g/km of CO2 emissions and costs £18,295.

With over 1.13m Citroën Dispatch and Peugeot Expert models sold since their introduction in 1995, PSA Peugeot Citroën hopes that both of the new third-generation LCVs will increase its 10 per cent market share by a further six per cent. The new car-derived technology pays dividends with much improved usability, while the new engines offer important gains in efficiency as well as increased refinement. Add in a more stylish appearance, enhanced cabin quality and functionality, as well as improved versatility, and it’s hard to imagine the new Citroën Dispatch doing anything but continue the success story.