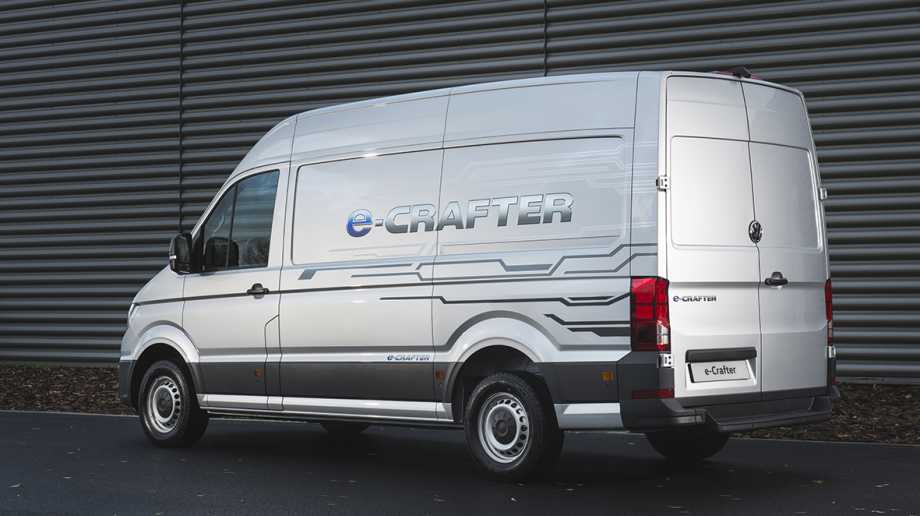 The Volkswagen e-Crafter spearheads the company’s all-electric light commercial revolution. Richard Gooding finds that it offers an accomplished sign of things to come

The e-Crafter is the latest addition to a Volkswagen’s diverse commercial vehicle heritage which spans almost seven decades. The Crafter is the biggest light commercial Volkswagen and it replaced the LT35 in 2006. The second-generation model arrived in 2016 with load capacities of between 3.0 to 5.5 tonnes, a choice of front, rear, or four-wheel drive powertrains and van or chassis cab configurations. Already on sale in Europe, prices and availability of the all-electric e-Crafter driven here are yet to be announced for the UK market.

Designed to incorporate an electric powertrain from the outset, the VW e-Crafter’s 35.8kWh lithium-ion battery sits under the bodywork at the front of the van. This means the standard Crafter’s carrying capacity is retained. That translates to 10.7 cubic metres of volume, with maximum payloads of between 1.0 and 1.75 tonnes. The practical aspects of the standard Crafter remains intact, too, with a through-loading width of 1,380mm, a cargo compartment height of 1,861mm, a maximum cargo space length of 4,855, and a pair of rear wing doors that open to 180 degrees.

Volkswagen claims an official NEDC cycle range of 107 miles. The e-Crafter is aimed at ‘last-mile’ delivery uses and customers such as energy suppliers, couriers and logistics drivers, as well as shuttle and taxi services. On a par with the range offered by the new all-electric Renault Master Z.E, expect ‘real-world’ range to be around 70 miles dependent on weather conditions
and how much cargo the van is carrying. Volkswagen calculates the e-Crafter uses 21.5kWh of energy per 100km/62 miles with a 975kg payload on board, which equates to 135mpg from a Crafter 2.0 TDI carrying the same cargo.

The company also points out the e-Crafter has been designed following analysis of 210,000 driving profiles from 1,500 customers that show most drivers cover between 43 and 62 miles per day, with multiple stop-starts. Four UK fleets from Gatwick Airport, Heathrow Airport, the City of London Corporation and the London Borough of Southwark took part in international e-Crafter trials from May to September 2018 and, along with 21 other European companies, provided feedback which aided the development of the final production model.

The e-Crafter’s battery can be recharged to 100 per cent from a 7.2kW supply in just over five hours. The van is compatible with the Combined Charging System (CCS), and from a 40kW DC CCS charging feed the VW’s battery can be charged to 80 per cent of its energy capacity in 45 minutes.

With the exception of e-Golf-style badges, the e-Crafter looks no different to the internal combustion-engined Crafters. Sharper looks came with the arrival of the latest version and the 2,590mm high roof line is elegantly integrated. Inside, an eight-inch colour infotainment touchscreen lifted from Volkswagen’s passenger cars displays the ‘e-manager’, a range monitor, navigation and smartphone connectivity functions, and the design and quality is all as you’d expect from a Volkswagen.

Practical as well as functional, standard equipment is high. Automatic air conditioning, LED headlights, and heated seats and windscreen are all on the e-Crafter kit list, as are parking assistance, cross wind and post-collision safety systems

Unsurprisingly, the e-Crafter shares the quiet and relaxed driving traits of car-based EVs. Aiding the car-like comparison is the powertrain, which has been taken from the popular e-Golf. The ‘EEM85’ electric motor generates 134bhp/100kW and 213lb ft (290Nm) of torque, which translates to impressive power and response from the off. The e-Crafter’s top speed is capped at 56mph, but that won’t fuss the targeted urban area users of the van. The light steering will prove useful, too, as will the single- speed transmission, and the welcome lack of diesel engine noise is another added benefit. Regenerative braking helps eke out range and tops up the battery on the move, too.

At its 2018 launch, the e-Crafter was priced at 69,500 euros in Germany, which equates to around £63,000 in the UK before the government’s Plug-in Van Grant is deducted. Already sold in selected left-hand drive European markets, UK market e-Crafter pricing and availability will be confirmed nearer the van’s release date, forecast to be mid-2021.

Along with larger light commercial vehicle rivals such as the newly-announced Fiat Ducato Electric, the Volkswagen e-Crafter is ideal for urban area last-mile deliveries. Like other electric LCVs, its zero-emission running is ideally placed to capitalise on the removal of diesel-powered light commercials from ever- stricter Low Emission Zones and Ultra-Low Emission Zones. As legislation is tightened up, more of these areas will appear, and the e-Crafter should prove useful in getting to areas where traditionally-powered LCVs will soon be unable to.

Overall, with a proven powertrain, a high- quality cabin, and an extensive equipment list, Volkswagen’s e-Crafter should suit delivery fleets who are looking for a zero- emission answer that complies with incoming legislation. Low running costs will also be enticing to those forward-thinking and early-adopting fleets. The downsides for now are the likely price and the wait for the van to arrive in the UK. But when it does, the e-Crafter will be an accomplished, useful, and tempting addition to the ever-growing band of electric light commercial vehicles.