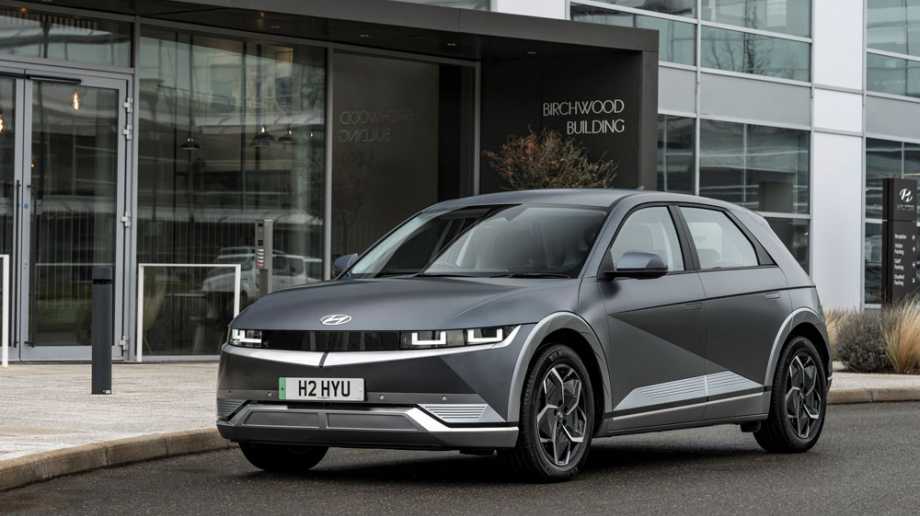 What is it?
The Ioniq range of hybrid, plug-in hybrid and all-electric models introduced the world to Hyundai’s electrified technologies in 2016, setting out the South Korean manufacturer’s stall to be a serious contender in the new age of electric cars. Fast forward six years and the new Ioniq 5 embodies the latest ideas in Hyundai’s thinking, but what a vastly different machine it is, from both those cars and what we have to come to expect from the company in terms of design and technology.

The Hyundai Ioniq 5 comes with a choice of two batteries. Originally introduced with 58kWh and 73kWh lithium-ion units, the latter has been replaced with a 77kWh battery. Combined with a choice of single motor, rear-wheel drive (RWD) or dual-motor, all-wheel drive (AWD) configurations, the Ioniq 5 has a WLTP potential driving range of between 238 and 315 miles. The Premium AWD car tested here – our test model was an earlier version with the 73kWh battery – has an official WLTP range of up to 298 miles on a single charge.

The larger battery can be mated to both RWD or AWD powertrains with 224bhp and 321bhp respectively, however, the smaller 58kWh battery can only be specified with a 168bhp RWD powertrain.

Underpinned by the higher voltage technology pays dividends when it comes to charging the Ioniq 5. Able to take charging speeds of up to 220kW means that a 0-80 per cent fill-up takes as little as 18 minutes. Up to 62 miles can be added in five minutes, and with a battery heater fitted as standard, the Ioniq 5 can adapt its battery temperature on the move for an improved charging performance when it reaches a chargepoint.

Plug into a 50kW chargepoint and a 10-80 per cent refill takes an hour with the 77kWh Long Range battery, dropping to 47 minutes with the 58kWh Standard Range unit. A full charge at a 10.5kW point takes just over six hours for the bigger battery model. To aid efficiency, an ‘Eco’ driving mode is standard and four levels of regenerative braking include an ‘i-Pedal’ one-pedal function.

There is also a ‘smart recuperation’ system which controls the regenerative braking levels automatically when speeds are above 6mph and certain conditions are met, such as changes in road gradient, distance, or an increase or decrease of the speed of the vehicle ahead. All Ioniq 5s also feature Vehicle-to-Load (V2L) charging which enables them to power other small electrical devices and it can even charge another EV with its 3.6kW output.

Before you even step inside, there’s no mistaking the Hyundai Ioniq 5 for anything else. Mixing styling cues from the Pony model of the 1970s but with an updated style, the pixelated front and rear lights are particularly neat touches. The £685 matte paint on our test car makes the appearance even more striking, and don’t be lulled into thinking the Ioniq 5 may be a rival to the Volkswagen Golf – its 4,635mm length and 2,152mm width point to a larger car. Hyundai sells the car as a mid-sized CUV.

The cabin takes a simple and clean approach. Twin 12.3-inch digital screens blend into one, spanning out from behind the steering wheel. Underneath these is a ‘shortcut’ bar consisting of physical buttons as well as a haptic panel. It might be more conventional than the Kia EV6, but the Hyundai’s cabin is no worse for that, and the screens have sharp and clear graphics. Space is another plus, the 3,000mm wheelbase accommodating lots of rear legroom and the commodious 527-litre boot has a false floor, under which the charging cables can be stored.

On the right-hand side of the steering wheel is the gear selector, freeing up interior space. The electric handbrake switch is also away from the floor, mounted on the dashboard behind the gear selector. The regenerative braking is controlled by a pair of steering wheel paddles – a familiar Hyundai approach, they are very intuitive to use. To activate the one-pedal mode, pull and hold the ‘+’ paddle for more than 0.5 seconds – it’s very effective, allowing the car to roll to a stop at junctions. The standard three driving modes – Eco, Normal and Sport – are changed via a ‘magneto’ steering wheel button, which also works very well.

Out on the road, the Ioniq 5’s pace is more than adequate. In 77kWh, 321bhp, AWD form, the big Hyundai surges along on its 446lb ft/605Nm of torque. The car shrinks around you when you’re driving, too, feeling more nimble than it should given its size and weight, and it can be driven on more twisty roads with assured confidence. There’s not a huge amount of body roll either, and the Hyundai corners flatly with lots of grip on the AWD models.

Very little road noise enters the cabin – even though the wheels are 19 inches in size – and although there is more wind noise, it’s not disruptive. Further playing the refinement card, the ride is very comfortable and the Ioniq 5 keeps its passengers insulated from the worst of road imperfections. The steering also has a nice weight, if not much feel, but it is at least precise, allowing the car to be placed well.

The range-topping Ioniq 5 Namsan Edition features auto-flush electric door handles, digital side mirrors – a video-based digital interior and exterior mirror system similar to that of the Honda e – a driver memory function seat, and a remote parking system. The Ioniq 5 Namsan Edition starts at £52,650. Both the Ultimate and the Namsan Edition are only available in AWD configurations with the larger 77kWh battery.

As with all electric vehicles, Hyundai’s first full EV is exempt from VED charges, in its first and following years of registration. Under current 2022-2023 company car taxation rates, the Ioniq 5 is charged a two per cent Benefit In Kind (BIK) value, which is the same as the 2023-2024 and 2024-2025 periods.

The original Ioniq family of cars may have got fleets ready for Hyundai’s all-electric future, but with an appearance like nothing else on the road, a comfortable and spacious interior, and incorporating the latest high-power and speed charging technologies, the Ioniq 5 sets the bar high for family-sized electric vehicles.

Add in a selection of very usable long distance ranges, a high specification and Hyundai’s usual five-year unlimited mileage warranty (with the battery guaranteed for a further three years), and the Ioniq 5 cements its numerous talents as a hugely capable and boldly stylish addition to the ever-growing EV market.