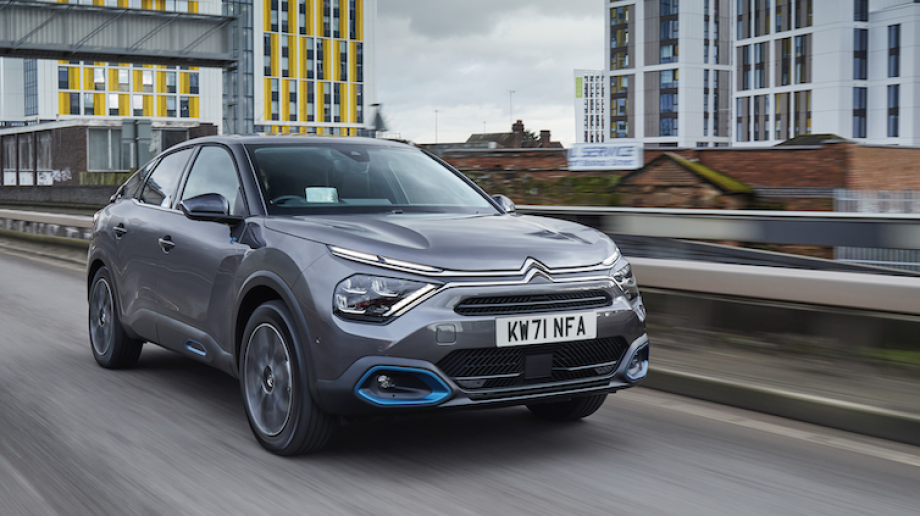 What is it?
The distinctive curved shape and individual three and five-door body styles of the first generation of Citroën's C4 family hatchback ensured it stood out when it arrived in 2004. The second-generation car ditched the offbeat appearance and was more in keeping with its rivals, but for the third-generation model, distinctive-ness is back.

SUV styling cues mix with a coupé roofline, the new C4 marking the rebirth of a comfort-focused Citroën. Petrol, diesel and all-electric models are on offer, the e-C4 using the same 100kW motor and 50kWh battery drivetrain and e-CMP platform as the Peugeot e-208 and Vauxhall Corsa-e among others.

What range does it have?
Launched earlier this year but recently upgraded, the e-C4's official range is between 217 and 219 miles.

How long does it take to charge?
On a home wallbox, the e-C4's battery can be recharged from flat to full in around eight hours. Connected to a 100kW rapid charger, this drops to 30 minutes for an 80 per cent capacity fill.

How does it drive?
The interior of the e-C4 might not be quite as inventive as the exterior, but it's still very modern. A frameless digital display sits ahead of the driver, with a 10-inch colour touchscreen in the centre of the dashboard. While this controls most of the car's functions, Citroën has included a physical bank of air conditioning controls.

Another neat touch is the Smart Pad Support Citroën, which is a retractable tray and stand that slides out from the dashboard above the glovebox, with the idea of providing somewhere for the front seat passenger's device if they want to look at on the move.

Elsewhere, fit and finish is good, but the Vauxhall Mokka-e, also based on the same e-CMP platform, feels more premium. The design of the rear window could better, too, as the glass is dissected by the rear spoiler, hampering visibility. However, Citroën does counter this by fitting parking sensors and a rear view camera.

Billed as introducing a return to comfort-orientated Citroëns, the e-C4 has 'Advanced Comfort' seats. With thicker foam and wider cushions, they are certainly comfortable. Fitted with 'Progressive Hydraulic Cushion' suspension, the e-C4 feels softer than some rivals but rides well, if not quite delivering the 'magic carpet ride' Citroën is aiming for.

This relaxed demeanour suits the car well however. The near-silence of its electric drivetrain heightens the calming experience, and the e-C4 has less road and wind noise than its Mokka-e relative. There is some roll in sharper corners, but you don't hustle the e-C4, just enjoy its relaxed appeal.

As with other models based on the e-CMP architecture, Eco, Normal and Sport driving modes are available, with two levels of brake regeneration, the more severe 'B' mode offering one-pedal driving. Handily, Citroën has also included a shortcut button marked with a lightning flash to bring up the EV driving functions on the centre touchscreen.

What does it cost?
The entry £30,895 (including the government PiCG) Sense Plus e-C4 includes 18-inch alloy wheels, an auto-dimming rear view mirror, dual-zone climate control, a head-up display, LED headlights, a 10-inch colour touchscreen with Apple CarPlay and Android Auto, as well as navigation.

Why does my fleet need one?
Striking to look at, and comfortable to sit in and drive, the new Citroën e-C4 brings a different set of qualities to the family hatchback market. Its almost-SUV stance echoes that of the C4 Cactus, but with similar digital tech and practicality as others in its class, it puts a refreshing spin on its predecessor. Quiet with a relaxing and calming character, the e-C4 offers a unique take in a traditional sector.