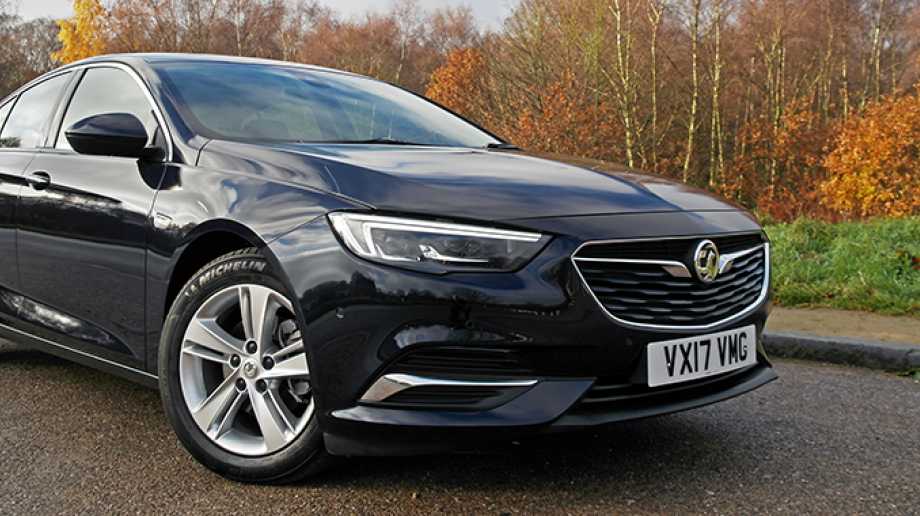 The Insignia Grand Sport is the latest in a line of illustrious Vauxhall family and fleet cars. Revealed in the summer of 2017, the second generation of the big Vauxhall has can count the Cavalier and Vectra among its D-segment predecessors. Its family lineage goes back over four decades, when the first-generation Cavalier jostled for scarce fast lane space with the Ford Cortina and Morris Marina. The latest Insignia takes styling cues from the 2013 Open Monza concept car, and is based on the same platform as its smaller Vauxhall Astra sibling. Taughter, more dynamic styling and a pair of new names – the five-door hatch / ‘liftback’ is called the ‘Grand Sport’, the five-door estate, the ‘Sports Tourer’) mark out the new car, as does a more premium-looking cabin and a raft of new engines, including a 1.5-litre turbocharged petrol unit. On test here is the cleanest Insignia Grand Sport, served up with a 1.6-litre turbodiesel engine and 105g/km of CO2.

From the outside, it’s clear that Vauxhall is aiming the Insignia Grand Sport a little higher than previous versions of its D-segment challengers. The new car boasts a style similar to a four-door coupé in the mould of the Volkswagen CC or new Arteon. While it’s clear there’s a family resemblance, the Grand Sport is a handsome machine, while the Sports Tourer is arguably even better looking, especially in the detailing where the chrome window trim wraps into the rear light clusters. Inside, that coupé-feel continues, the low-slung driving position and wraparound dashboard offering a cocooning effect more akin to a sporting car than a family-orientated motorway muncher. Quality in the latest car has taken a step up, the fake leather dashtop covering adding a more luxurious feel, while, with few exceptions, most of the buttons and switches feel nicely made and durable. The eight-inch ‘Navi 900 IntelliLink’ colour touchscreen infotainment system is easy to use and offers Apple CarPlay and Android Auto smartphone connections. The full-colour TFT instrument screen ahead of the driver is crisp, clear and works well, and shows myriad driver information, and on our test car was upgraded to the £415 eight-inch option, which, with lots of read-outs is useful to keep an eye on economy. And, as well as being well-equipped, the Insignia Grand Sport Tech Line Nav is practical, too, and will swallow 490 litres of luggage, with the seats up, 1,450 litres when they are folded. On the move, the Insignia Grand Sport is a composed companion. A happy and relaxing cruiser, the 1.6-litre diesel engine offers little if no noise when clipping along, the slightly gruff oil-burning rumble only making itself heard under a heavier right foot. The 17-inch alloy wheels transmit more road noise to the cabin than the car’s slippery shape does wind noise, but it’s not a deal-breaker. As you might expect for a car so sizable, the ride is good, and soaks up imperfections with barely a shrug, while a 92mm increase in wheelbase makes the Grand Sport feel composed and assured at all times. When the going gets twisty, the Insignia acquits itself well, too. Positively-weighted steering means you can place the car well on the road, and with low levels of body roll, the Insignia is fun to drive and feels much more nimble than its near 5.0-metre length suggests. Sadly, the optional £850 ‘FlexRide’ system which offers three driving modes – Normal, Sport, and Tour – isn’t available on 107bhp-engined cars, but is on the 114g/km 133bhp model. The FlexRide system fine-tunes selected parameters of the car depending on which mode is selected. ‘Tour’ makes the Insignia Grand Sport even more of a comfortable cruiser, while ‘Sport’ does just that, offering up a firmer ride and steering feel.

Vauxhall quotes an official combined fuel economy figure of 70.6mpg based on the soon-to-be discontinued NEDC test cycle. Over the duration of our 362-mile test, we achieved an average of 52mpg.

The Vauxhall Insignia Grand Sport Tech Line Nav is priced from £21,675 in 1.5-litre Turbo petrol trim, and sits in the upper end of the five-door hatch range. Reflected in that positioning is a high level of standard equipment which includes 17-inch alloy wheels, automatic lights and wipers, cruise control, dual-zone climate control, front and rear parking sensors, LED daytime running lights, twin rear USB sockets, and a ‘Navi 900 IntelliLink’ eight-inch colour touchscreen infotainment system. The Insignia Grand Sport Tech Line Nav we tested costs £21,695, but had some selected options including LED headlights, a glass sunroof, a head-up display, a parking assistance system, as well as a wireless charger, which brought the price up to £27,085. The Vauxhall Insignia Grand Sport range starts at £18,780 for the petrol-powered Design 1.5 Turbo ecoTEC, and tops off with the £33,415 GSi Nav 2.0 BiTurbo D 4x4 Auto BlueInjection. The natty Sports Tourer (see below), which, at £34,915 for the GSi Nav 2.0 BiTurbo D 4x4 Auto BlueInjection model, is the most expensive Insignia on offer.

Insignias similar to our test which also pack a 1.6-litre, 107bhp turbodiesel engine under their bonnets are the cleanest Vauxhall currently makes. With 105g/km of CO2 emissions, they attract a Benefit in Kind (BIK) rate of 26 per cent, in line with the latest company car BIK rates, introduced in April this year. A four per cent diesel supplement applies if cars are not compliant with the new ‘Real Driving Emissions Step 2 (RDE2) testing programme. The new test was developed after the Volkswagen emissions issue, but as no diesel models have yet passed the procedure, the test itself is under review. If you choose the Insignia Sports Tourer with this engine, emissions rise to 112g/km.

Vauxhall has traditionally been a strong contender in the fleet market, and the Insignia Grand Sport follows on from mid‑size saloon star players such as the Cavalier, Vectra and previous-generation Insignia. A much more premium look both inside and out gives the new car a lift in quality, and while the lowest‑emitting of Vauxhall’s ecoTEC engines for the Insignia doesn’t match the official economy claims in the real world, it’s still a commendable unit. The latest generation of Vauxhall’s evergreen fleet challenger offers up a far more tempting proposition against longstanding rival the Ford Mondeo, as well as more upmarket teutonic competition such as Volkswagen’s Passat. And while the Ford may beat the big Vauxhall on emissions (94g/km vs 105gkm) and therefore BIK, the car from Luton has a usefully cheaper list price than both. Comfortable, stylish, very easy to live with, and an enjoyable drive, the new Vauxhall Insignia Grand Sport is a very credible fleet car contender capable of gobbling up long distances with very little effort. Add in impressively low emissions for a car so spacious and there’s very little not to like, its environmental badge of honour worn with pride.

As well as the five-door Insignia Grand Sport – which, despite the name, follows the traditional ‘liftback’ looks of the previous-generation Insignia, there is also an estate named ‘Sports Tourer’. Its lifestyle-sounding name fits with its sports-orientated styling, and the Insignia Sports Tourer is a handsome load-lugger, its upturned rear window and swoopy chrome window detailing adding a touch of dynamism. The Insignia Sports Tourer range mirrors that of the Grand Sport, kicking off with the £20,300 Design 1.5 Turbo ecoTEC petrol, rising to the £34,915 2.0 BiTurbo D 4x4 Auto BlueInjection. In identical Tech Line Nav trim as our Grand Sport test car, the 1.6-litre Turbo D ecoTEC costs £23,235, a £1,540 premium over the non-estate model. A raised ground clearance Cross Tourer model is also available, priced from £25,950.