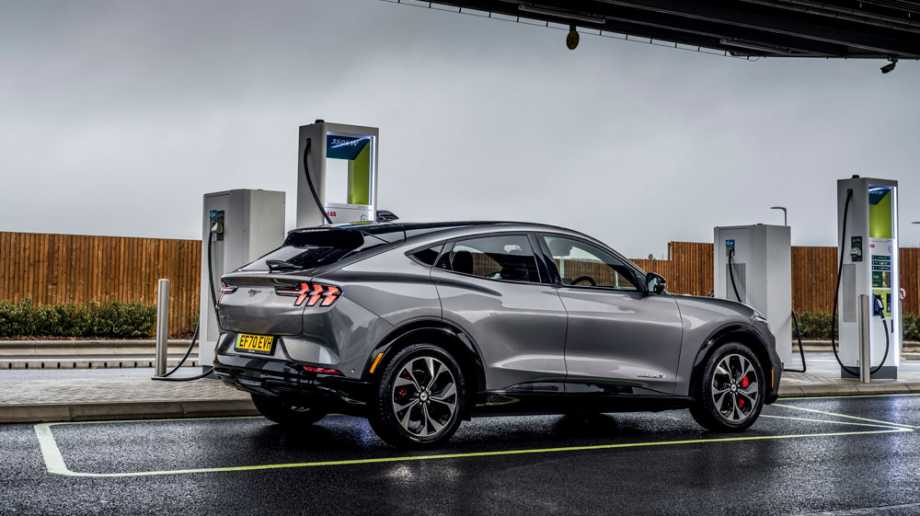 Launching its EV ambitions with a model which plays on a heritage nameplate is a bold move, but, as Richard Gooding discovers, the Mustang Mach-E has little in common with Fords of yesterday, and it heralds an adventurous new era for the company

Ford occupies a special place in UK drivers’ hearts, and over the decades, has been a staple of the fleet car market, But up until now, it’s not been a big player in the electric car market – there was an electric version of the third-generation Focus, but it was so rare, few remember it. However, but that is set to change. By 2024, the company is set to introduce three new passenger EVs – in addition to four electric commercial vehicles – to Europe, with plans to sell upwards of 600,000 zero emission vehicles by 2026.

As statements of intents go, the Mustang Mach-E is a sizable one. Rather than base its first EV on a Fiesta, Focus or Kuga, Ford has gone fully down the emotional route and chosen to mix styling cues and the name of one of its most iconic models with an SUV body. The Mustang Mach-E can seat five people, and comes in a mix of rear-wheel and all-wheel drive models, with standard (68kWh usable) or extended range (88kWh usable) battery packs.

As its first all-electric vehicle and being an SUV, you’d expect Ford to have imbued the Mustang Mach-E with a practical range, and it has. The Standard Range models can travel between 248 (AWD) and 273 (RWD) miles, while the Extended Range versions go quite a bit further – 335 (AWD) and 379 (RWD) – thanks to their bigger batteries. The fire-breathing Mach-E GT has an official WLTP-rated electric range of 310 miles.

Connect the Mustang Mach-E Extended Range to a 7.4kW wallbox – Ford offers its Ford Connected Wallbox fitted by British Gas / Centrica – it will take 10 hours to charge the battery from 10 to 80 per cent. Upgrade the wallbox to a 11kW version, and that figure drops to seven hours. Mach-E Extended Range models can also charge at 150kW, and when plugged into a fast charger, a 10 to 80 per cent refill will be complete in 45 minutes, with around 66 miles of range added in approximately 10 minutes.

For greater efficiency, the Mustang Mach-E also has a one-pedal driving function, where more kinetic energy is returned to the battery. Working in the same way as for other EVs, acceleration and deceleration are controlled by the pressing or lifting of the accelerator pedal. It works well and is very easy to modulate.

Outside, the curvaceous bodywork and Mustang-like rear lights leave you with no doubt the Mach-E draws on Mustang heritage. Indeed, there are no Ford badges on the car at all, just galloping pony silhouettes. No visible door handles give it clean lines, and the obvious rear haunches point to which end of the car the drive comes from. The high-tech feel starts with a piece of theatre – to open the front doors, press the circular touch button on the B-pillar and the door pops open, ready to be pulled by the small ledge handle. A little needless perhaps, but it gives a high-tech impression.

Inside, the first thing that strikes you is the 15.5-inch central touchscreen. Similarly to that in a Tesla, it is hardly subtle, and is a complete departure to interiors of previous Fords. Portrait in orientation, there is a click wheel dial at the bottom to adjust certain functions such as the air conditioning, and it works well enough. Ahead of the driver is a 10.2-inch digital instrument cluster, inset into a dashboard ‘shelf’ which gives the impression of being much lower mounted than other SUVs, therefore creating a more sporting feel.

As well as plenty of space for passengers – both headroom and legroom is good in the front and the back seats – there is plenty of capacity for luggage, too. A 402-litre boot can be extended to 1,420 litres by folding the rear seats, and there is also an additional front ‘trunk’ which can hold up to 100 litres. The Mustang Mach-E is safe, too, with a host of safety and driving aids, including adaptive cruise control, blind spot monitoring system, collision mitigation, and lane-keeping assistance systems.

Ford has made a name for itself for building cars that favour more ‘enthusiast’ drivers, and the Mustang Mach-E continues that tradition. For a bulky SUV, it handles keenly and is agile, the steering boasting plenty of feel and response. A mostly comfortable but firm ride is only really caught out over larger road imperfections.

Three driving modes allow the experience to be further tailored. ‘Whisper’ is an eco mode which ramps down responses for efficiency; ‘Active’ is similar to a ‘Normal’ mode in other EVs; and ‘Untamed’ is the sportiest setting. Performance in the Extended Range AWD model is plenty – the 258kW electric motor and 427lb ft of torque gives the Mustang Mach-E a 0-62mph time of 5.1 seconds.

The range-topping £68,030 Mustang Mach-E GT is overtly sporty in its appearance with 20-inch alloy wheels, 19-inch brakes with red calipers, and a unique front grille and bumpers. Inside, there are GT Performance seats, and GT scuff plates. The price premium also pays for a performance upgrade to a 358kW / 479bhp electric motor with 860Nm / 634lb ft of torque.

Ford’s all-electric SUV is exempt from VED charges, in the first and following years of registration. Under the current 2022-2023 company car taxation rates, the Mustang Mach-E attracts a two per cent Benefit In Kind (BIK) value, which is the same as the following 2023-2024 and 2024-2025 years.

It’s perhaps little surprise that Ford has drawn on one of its most emblematic models to launch its EV ambitions. In reality, the Mustang Mach-E has very little in common with its combustion-engined pony car siblings, but that doesn’t really matter. Here is a spacious and practical SUV, with striking looks and a high level of technology, as well as a decent long-distance range.

Add in the fondness and the ‘everyman’ appeal for which Ford is regarded, and the Mustang Mach-E will be attractive to fleet drivers who want an electric vehicle with low running costs, which appeals to both the head and the heart.