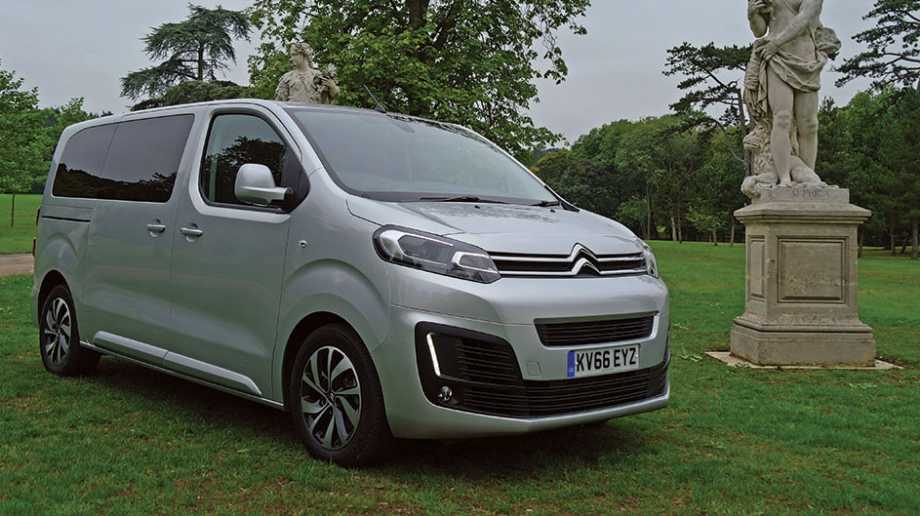 While its futuristic-sounding name might not take it into the stratosphere, Richard Gooding finds that the new Citroën SpaceTourer does offer increased space and seating flexibility over traditional multi‑purpose vehicles: ideal for those who are seeking more spacious travel solutions

With very few ways to disguise it, it’s obvious that the new Citroën SpaceTourer is the passenger-carrying version of the French company’s new Dispatch van, which we tested in GreenFleet issue 96. Bad that’s no bad thing. Like its award‑winning commercial sister, the SpaceTourer is available in three lengths: the 4.60m XS, the 4.95m M, and the 5.30m XL.

Similarly to the Dispatch, the XS variant is a new, more traditional MPV-sized entrant into the van-derived passenger carrying market. Of course, the big advantage players in the commercial-derived market have is their increased capacity, and the SpaceTourer can be configured with eight or even nine seats – a traditional car‑based MPV will be limited to seven.

Although the SpaceTourer cannot hide its origins thanks to its large square shape, the standard body-coloured bumpers and exterior trim helps distance it from its commercial cousin. Our test car featured £400 optional 17-inch alloy wheels which lifted the looks even further, while a large – but heavy – one‑piece tailgate at the rear makes the big Citroën appear more ‘civilian’.

The rear window also opens independently of the rear door itself, too, a useful and practical touch. Inside, the hotels, private chauffeurs, and taxi firms the SpaceTourer is aimed at will appreciate its nicely‑finished dashboard and flashes of sliver trim, which makes it appear more upmarket.

Just like the Dispatch, the SpaceTourer features a seven-inch colour touchscreen in the middle of the dashboard which brings connected media, smartphone/telephone options and satellite navigation technologies. SpaceTourer Business variants – the model we have on test here – come as standard with three rows of seats, with the only difference between eight and nine-seater models being a two-place bench rather than an individual passenger chair.

The second row of seats folds down for passage into the rearmost three, and passengers who sit in the third row of seats get the same 250mm of knee room as those a row ahead, and the SpaceTourer’s large square shape makes for a good load carrying capacity.

Mid-length M versions of the SpaceTourer boast 507 litres of luggage space with the third row of seats in place, rising to 2,281 litres with them removed. However, take out the second row of seats, and there is 3,968 litres of capacity. Want more? The largest XL models offer 4,544 litres when all the rear seats are removed, and up to 2,932 litres with the second row in place.

Further aids to practicality include large sliding side rear doors which can be motorised for even more ease. They can also be opened and closed via ‘Hands Free’ technology by waving your foot under the rear bumper corners. Also, the 1.9-metre height of the SpaceTourer itself enables it to fit into most indoor parking areas, making height restrictions a thing of the past.

The BlueHDi 150 2.0-litre engine sits towards the top of the SpaceTourer range, but even with its 148bhp and 273lb ft (370Nm) of torque, the SpaceTourer’s pace is more on the leisurely and laid back side thanks to its 2,800kg weight. However, for most, it will do the job just fine when it comes to shuttling people across busy cities.

On the move, the big Citroën is refined for such a large vehicle, and being based on the same new car-like ‘EMP2’ platform as the Dispatch and the C4 Picasso means it is enjoyable to drive. The high seat height means vision isn’t an issue, while the light steering helps placement on the road and makes the SpaceTourer easy to manoeuvre. The suspension has been retuned from the Dispatch and the van-based MPV delivers a compliant and comfortable ride.

There are two versions of the Citroën SpaceTourer. The first – in ‘Feel’ trim – is aimed at private customers, while the second – in ‘Business’ trim – is targeted at fleet buyers. The range starts with the XS BlueHDi 95 manual at £28,550 OTR, while our test BlueHDi 150 S&S 6-speed manual model in mid-length M form costs £31,730. The top of the range XL BlueHDi 180 S&S EAT6 automatic version meanwhile is priced at £34,830 OTR.

How does the SpaceTourer stack up to its rivals in terms in price? Just as with the Dispatch, there is in-house competition to the big Citroën in the form of the new Peugeot Traveller. Like its PSA Group cousin, the Traveller is also available in both private and business versions and in the same three lengths as the SpaceTourer, and both their commercial siblings.

The Peugeot Traveller Business Compact starts the range at a SpaceTourer Business XS‑identical £28,550 OTR, while prices further up the range mirror the Citroën model length‑for-length, engine‑for‑engine.

The Peugeot has an even plusher ‘VIP’ trim level, though, which tops out at £41,340 for the BlueHDi 180 S&S EAT6 automatic in 5.3m Long form. Other rivals include the Volkswagen Shuttle, based on the firm’s successful sixth‑generation Transporter. Available in two lengths with four, five, six, seven, eight, and nine-seat versions with 2.0‑litre TDI engines, prices start at £30,348 OTR.

Space and versatility are what most buyers look for in vehicles such as the SpaceTourer and its here where the big Citroën delivers. The flexible seating and luggage capacity arrangements mean there should be a combination which suits everyone, while the cleaner engines deliver more efficiency than before.

Like the new Dispatch before it, the SpaceTourer is accomplished and enjoyable thanks to its car-derived technology, and if a traditional MPV is a little on the small side, it just might provide the right answer to the all-important extra space question.