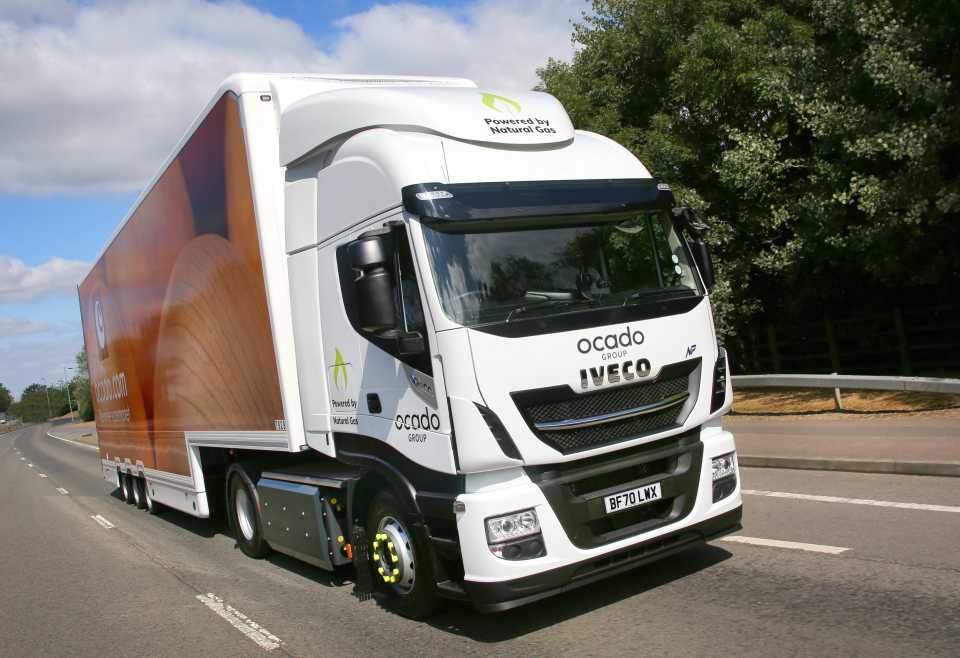 This latest batch forms a larger order of 31 new IVECO Stralis, with the remaining 11 being 420-horsepower diesels, with the narrower, lower AT cab for use within the M25.

By the end of the year, Ocado’s tractor fleet will reach 168 units, over a third of which will be IVECO Stralis running on Compressed Natural Gas, Ocado has already managed to rack up over 11.5 million CNG-fuelled kilometres, and with the government locking gas fuel duty at 50% of diesel until 2032 means that it is already seeing significant financial benefits too.

The trucks are run on a five-year operating lease through Hitachi Capital Vehicle Solutions and save the business around £7,000 per truck, per annum, offering a two-year payback against an equivalent diesel truck. The Stralis are maintained by a number of IVECO service centres dependent on their home base on 5-year Elements 3XL R&M contracts.

Currently, the majority of the CNG trucks run out of Ocado’s Hatfield CFC (Customer Fulfilment Centre) where last year they partnered with Gasrec becoming the first retailer to self-fund their own CNG refuelling station. This on-site station is linked directly to the grid and will be maintained and supported by Gasrec as part of a 10-year agreement.

The latest batch will run out of Ocado’s North Warwickshire CFC in Dordon where the company are exploring plans for a second refuelling station as it intends to expand its fleet of gas-powered trucks further still.

For now, the vehicles are used on routes that allow them to use Gasrec’s flagship LNG and CNG refuelling facility at Daventry International Rail Freight Terminal (DIRFT). Capable of refuelling up to 700 trucks a day, it’s one of Europe’s largest gas refuelling facilities.

Last year, Ocado collected the Private Sector Fleet of the Year award at the 2019 Green Fleet Awards, giving strong recognition to the efforts the business is making towards sustainability.

“We had the desire to look at how we could begin to move away from diesel and the first time we saw the IVECO, we knew it was a game changer in terms of gas technology”, commented Graham Thomas, Fleet Operations Manager at Ocado.

“We chose CNG as we didn’t necessarily need the extended range offered by liquified gas, and in terms of a refuelling experience, CNG has much more in common with diesel. It’s an easier transition for the drivers, and in terms of health and safety, it allowed us to adopt the changes quickly and with minimal disruption to day-to-day operations.”

According to Ocado, the gas is currently being supplied at a minimum of 50% biomethane meaning significant reductions in CO2 output, up to 68% across the fleet calculated from the total amount of biomethane used. Going forward, the mix of biomethane is being increased, making further inroads to cleaner transport.

“Our team works closely with operators to help them overcome any barriers they may have around change. With high profile companies such as Ocado leading the way, it’s all the more exciting to be at the forefront of gas technology. Together, we are making substantial in-roads to show big businesses and the transport industry as a whole how to make an important change and respect the environment.”