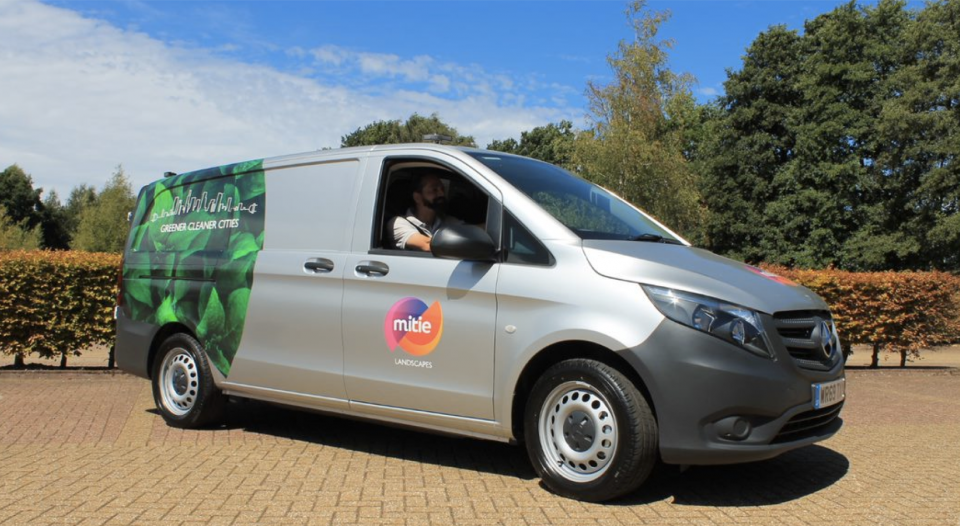 Mitie has launched a new Plan Zero City Landscaping Service to reduce emissions in high-pollution areas such as cities and urban environments.

The service uses only electric vehicles (EV), battery-powered equipment, such as electric trimmers, leaf blowers and lawn mowers, commits to using no single-use plastic and will generate zero landfill waste.

The Service will use a Mercedes e-Vito electric van. This has been custom-fitted with solar panels on its roof to generate renewable energy, which will be used to charge the battery-powered landscaping equipment, without affecting the charge of the van’s own battery. With all EV charge points at Mitie sites already powered by renewable energy, the van and tools will be truly zero emission, bringing Mitie one step closer to its 2025 net zero carbon emissions objective.

The Plan Zero City Landscaping Service has also replaced all chemicals, such as pesticides and synthetic fertilisers, for environmentally-friendly techniques, such as hand weeding, to further reduce impact on the environment. In addition to this, the Service uses only sustainable working practices, including maintaining flexible work schedules to help reduce traffic in the cities at peak times and eliminating all single use plastic by replacing plastic bags with reusable polypropylene refuse collection satchels and rack sacks.

The Service will also focus on helping clients improve the ecology of their surroundings by providing expert advice and actions to enhance biodiversity in the communities where they are based. This can include wildflower planting to encourage pollinators or creating ‘green walls’.

Drawing from Mitie Waste’s experience and expertise, the Plan Zero Landscaping Service also uses sustainable waste management techniques to ensure that it sends zero waste to landfill. This includes reducing environmental impact by eliminating the creation of waste in the first place, as well as improving recycling rates. Any general waste that is produced will be processed into heat and power. Meanwhile, green waste will be sent to anaerobic digestion plants, where it will be turned into methane, liquid fertiliser and compost to be used in a number of industries, including natural gas power and farming.

The Plan Zero City Landscaping Service is being trialled in London and will be rolled-out to other major cities across the UK later this year.

Mitie is marking the launch of the new Plan Zero City Landscaping Service with the delivery of its 550th EV, meaning Mitie is already three-quarters of the way to achieving its major milestone of switching 20% of its cars and small vans (around 715 vehicles) to electric by the end of 2020. The Mercedes e-Vito joins the 449 other electric cars vans which have joined Mitie’s fleet, one of the largest electric fleets in the UK, in just over a year.