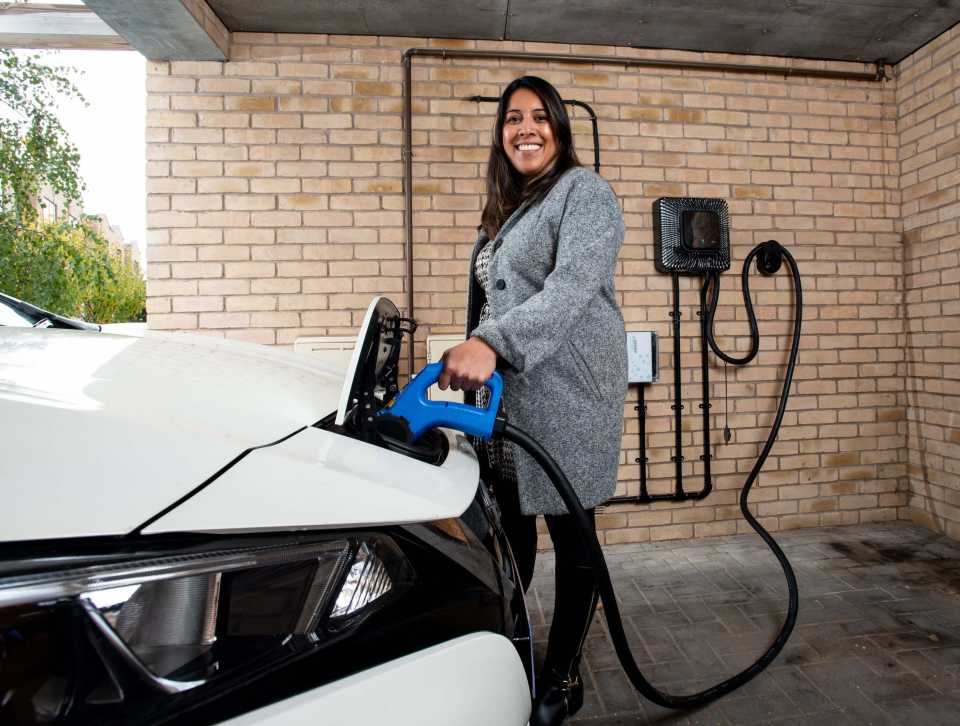 Electric Nation Vehicle to Grid (V2G) has installed the first of 100 V2G chargers in its trial to demonstrate how V2G technology can provide a solution to electricity network capacity issues as the numbers of electric vehicles (EVs) increase.

Over 450 EV drivers have applied to join the new Electric Nation trial so far, which is a project involving Western Power Distribution (WPD), in partnership with CrowdCharge.

Nissan EV owners in the WPD licence areas of the Midlands, South West and South Wales are being recruited to take part in the trial of Vehicle to Grid smart charging technology. Currently, only Nissan EVs can be used for V2G charging due to their CHAdeMO technology.

The trial is using the Wallbox Quasar, the smallest and lightest bidirectional charger for home use. By using a vehicle to grid charger, EVs can put energy back into the grid at peak times. This technology reduces the need for extra electricity generation or network reinforcement.

Rasita Chudasama is the first Electric Nation Vehicle to Grid trial participant to have a charger installed, which happened at the end of October. Rasita says “I’m delighted to be part of the Electric Nation Vehicle to Grid project and to play a role in trialling this exciting new technology. By reducing the potential impact of EV charging on electricity networks, V2G should support the rapid uptake of electric vehicles, which will help us to improve local air quality and combat climate change. I’m looking forward to seeing how V2G works from an EV driver’s point of view.”

The Electric Nation Vehicle to Grid trial is offering free installation of the V2G smart chargers worth £5,500 to Nissan EV drivers who live in the WPD regions. CrowdCharge is recruiting 100 people for the trial to help Distribution Network Operators (DNOs) and others to understand how V2G charging could work with their electricity networks.

Electric Nation Vehicle to Grid is the first V2G project to use multiple energy suppliers instead of just one. This means that the trial is a more realistic simulation of a future world in which many streets will have a number of EVs using V2G chargers operated by different energy suppliers. Flexitricity has recently been announced as the project’s first energy partner, with up to four more to follow.

During the one-year trial each supplier will use the V2G chargers to test their various energy services, such as using the EVs that are part of the Electric Nation trial to put power back into the electricity grid when required, and charging the EVs during periods of excess supply in the system.

All the suppliers will use CrowdCharge’s demand management charger platform, which provides optimised charging sessions to ensure that the customer’s vehicle will be charged at the cheapest rate whilst being ready when needed.