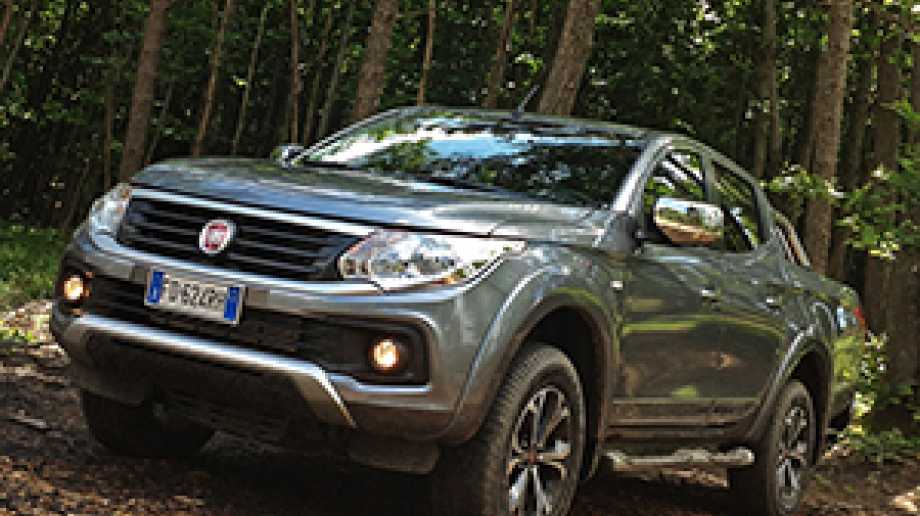 The one-tonne pick-up sector is growing in the UK, and the new Fiat Professional Fullback is the latest entrant. Armed with a competitive price and payload, in addition to well-proven Japanese mechanicals, has the Italian commercial vehicle manufacturer done enough to make it succeed among other more-established rivals?

Fiat Professional Fullback LX - What is it?

The Fiat Professional Fullback is the Italian company’s new entrant into the UK’s burgeoning pick-up sector. The market is booming in Africa and the Middle East, where small flat-bed pick-ups account for more than 64 per cent of the commercial vehicle sector. It’s a different story in Europe, where the market is only six per cent, but make no mistake, the Fullback is an important player in Fiat Professional’s revised 2016 range.

It admits that strategic alliances are important in the commercial vehicle sector, and, just as other models in its all-encompassing commercial vehicle range share parentage and siblings with other vehicle makers, so does the Fullback.

Based on the current Mitsubishi L200 (which itself was relaunched in 2015), the Fullback is available with either a 2.4-litre 150bhp turbodiesel engine of a 180bhp version of the same capacity. Six-speed manual or five-speed automatic gearboxes can be chosen, with emissions starting from 169g/km for the lower-powered variant.

Only the higher-output version was available to drive at the international press presentation just outside Turin, which, when configured with the manual gearbox, emits 173g/km. Two trims will be available in the UK when the Fiat Professional Fullback goes on sale on 4 July, the 150bhp SX and the range-topping 180bhp LX.

The Italian company sees the agricultural industry as a large market, but is also aiming the light commercial as a lifestyle vehicle, equally happy carrying passengers and their sports accessories as Euro pallet-laden loads. To that end, a full range of Mopar accessories is available, and our car was fitted with 17-inch wheels as well as side steps – as are all LX models – as well as optional rear chrome bars, which play the lifestyle look to great effect.

At the rear, car-like L-shaped tail lights feature either side of the fold-down tailgate, while swage lines run the whole length of the profile, which is the view at which the Fullback looks most like its Japanese L200 cousin. Overall, though, its a convincing enough effort – to our eyes at least, the Italian-Japanese Fullback appeals more than the slightly fussy-fronted Mitsubishi.

As you’d expect from its rugged looks, the Fiat Professional Fullback has a selectable four-wheel drive powertrain. Like the Mitsubishi, it can be driven permanently in both 2WD or 4WD, on tarmac as well as off-road. A Torsen-design locking centre differential helps improve traction, and the fun; range of four driving modes on the LX (the SX offers one fewer) can be selected by a rotary dial up to 62mph when on the move.

Two-wheel ‘2H’ is recommended for tarmac conditions and for best economy, while ‘4H’ four-wheel drive mode is suggested for use in rough road conditions. ‘4HLc’ mode is primarily for low-grip surfaces, while ‘4LLc’ offers maximum grip on steep hills, mud, sand and deep snow surfaces. The ltalian pick-up copes well with the rough stuff, the wooded and rutted paths of our forest valley test routes proving little obstacle. A range of good articulation and grip adds to its impressive four-wheel drive repertoire.

Our test model was loaded with a Euro pallet’s worth of salt, so the rear end was more laden than some Fullbacks may be at times, but the ride is generally good. A proper commercial vehicle-like leaf spring sits under the 1.52m-long load bay – which Fiat Professional cites for reliability and sturdiness reasons – and although it was hard to tell what the Fullback feels like unladen, we suspect there may be a bouncier edge to the ride in the old-fashioned pick-up tradition.

The steering is light for a more weighty commercial vehicle, and feels lighter when in two-wheel drive mode. An impressively small 5.9m turning circle is perfect for more twisty and demanding off-road routes, while the steering rack itself offers just 3.8 turns lock-to-lock.

The 2.4-litre 180bhp turbodiesel engine of the 180bhp Fullback offers lots of low down torque – its full 317lb ft/430Nm is delivered at 2,500rpm – and the Italian LCV is rarely found wanting for power. On the road, the Fullback feels more like a car than a commercial vehicle, the engine settling into a quiet volume once on the move, and delivering its power strongly.

Inside, the Fiat Professional Fullback feels more like a car than a commercial vehicle, too, with higher perceived quality than a few of its rivals and a smart, if generic-Mitsubishi cabin design. A slightly fiddly and non-intuitive 6.1-inch sat-nav, DAB and Bluetooth-laden colour touchscreen borrowed from the Outlander PHEV dominates the centre of the dashboard, while other switches are obviously more Mitsubishi than Fiat.

Front and rear passengers should have no reason to complain about cabin size, though, as there is plenty of room on offer. Standard equipment is high, too, adding to the overall car-like feeling. LX models feature advanced ESC with ASR and TSA (Trailer Stability Assist), seven airbags, bi-xenon headlamps with washers, cruise control, dual-zone climate control, electrically-adjusted and heated front seats, Hill Start Assist, keyless go, and a Lane Departure Warning system.

There's also LED daytime running lights, a reversing camera, and Start & Stop as standard, while comfort can be increased with the ‘Touring’-specification suspension which also forms part of the high specification. Specify an auto ‘box and the touchscreen grows to seven inches, while transmission paddle gear shift levers sprout from behind the steering wheel.

The Fiat Professional Fullback faces some formidable competition in the UK from rivals such as the Ford Ranger, Nissan Navarra, Toyota Hilux and Volkswagen Amarok, as well as its Mitsubishi L200 relative. Entry-level Fullback SX-specification cars start at £20,995 – excluding VAT and other on-the-road (OTR) charges – rising to £24,395 for the top-spec LX with automatic transmission. Our LX manual car retails at £22,995.

The list price for the entry-level double cab Mitsubishi L200 4Life is £19,749 (excluding VAT, Government Vehicle Excise Duty and First Registration Fee), so the Fiat is pricier than its Japanese cousin, which also offers a wider range. For comparison, the Amarok offers a similar choice of power outputs as the Fiat, and is priced from £20,360 for the 138bhp Startline, while the Ford Ranger retails from £20,045 (excluding VAT and OTR charges in both cases). The least expensive double cab version of the Toyota Hilux meanwhile starts at £21,510 (OTR, with VAT deducted).

Should I buy one?

Fiat Professional hopes the new Fullback will give it a foothold in the buoyant Europe, Middle East and Africa medium-duty pick-up market, in which 650,000 vehicles were sold last year. That’s over 22 per cent of the total light commercial market,and even in the UK numbers are increasing, with over 40,000 pick-ups registered in 2015 – a jump of 20 per cent when compared to 2014.

Both on paper and on the road, the Fiat Professional Fullback offers a very comparable specification compared with its nearest rivals. It also appears to be priced bang on target for the sector in which it sits. The Italian newcomer is only available from the extensive network of Fiat Professional commercial vehicle dealers as opposed to Fiat car dealers, which may slightly hobble its chances as a family-friendly ‘lifestyle’ vehicle.

However, the Fiat Professional Fullback range offers business and consumer/retail customers alike an attractive, capable, car-like and well-specified pick-up which is competitively-priced and enjoys among the lowest emissions in its class.

The Fullback may be the newest star in the Fiat Professional firmament, but the company has made revisions to the rest of its range, too, with the primary focus on lower emissions and ‘clean’ technology.

Fiat Professional Fiorino SX 1.4 Natural PowerStarting with the 2.1m3 New Florino and ending with the longstanding and hugely popular 8-17m3 Ducato, the 2016 Fiat Professional is the ‘best ever’, according to the Italian commercial maker. With the exception of the new Fullback pick-up, all models feature Euro 6 engine technology for lower emissions and improved efficiency, with cleaner EcoJet diesel and Compressed Natural Gas (CNG)-powered variants in selected ranges – the Fullback complies to Euro 5+ emission standards.

Load-carrying versions of the Ducato employ Low Pressure Exhaust Gas Recirculation system (LPEGR) technology for 2016 to lower NOx emissions without the complexity, added weight and additional costs associated with using emission additives: AdBlue and Selective Catalyst Reduction (SCR) technology still features on passenger-carrying versions of the big Fiat Professional model. Goods transport operators should benefit from the LPEGR technology in particular, as it suits situations where low running costs are important. At 151g/km, the 2.3-litre EcoJet model offers the lowest emissions in the Ducato range, with fuel economy of up to 49.5mpg.

EcoJet models of the revised Doblò Cargo offer fuel efficiency improvements of up to 15 per cent, while emissions start at 120g/km thanks to a new aerodynamic pack, an ‘intelligent’ alternator, low rolling-resistance tyres, low-viscosity oil, Start&Stop systems, and a variable-displacement oil pump. Fiat Professional claims fuel economy of up to 61.4mpg. Prices for the new Fiat Professional Doblò EU6 start at £13,545, while the Ducato Euro 6 with LPEGR is available from £21,445 (excluding VAT and on-the-road charges in both cases).

New for 2016 is the Talento, a medium-sized van which replaces the Scudo. Based on the Renault Trafic/VauxhallVivaro, the new Fiat Professional Talento is smarter looking than both of its relatives. Named after an ancient coin to ‘evoke value and dependability’, the Talento is available in standard and high-roof van versions, people carriers, and crew cabs with two wheelbase options. Maximum loading capacity is 8.6m³, with a maximum payload of up to 1,249kg. Engines include MultiJet 95 and 120bhp turbodiesels, while EcoJet twin-turbo diesels are available in 125 and 145bhp configurations with Stop & Start. SCR technology features on the EU6 engine range, with emissions starting from 160g/km.