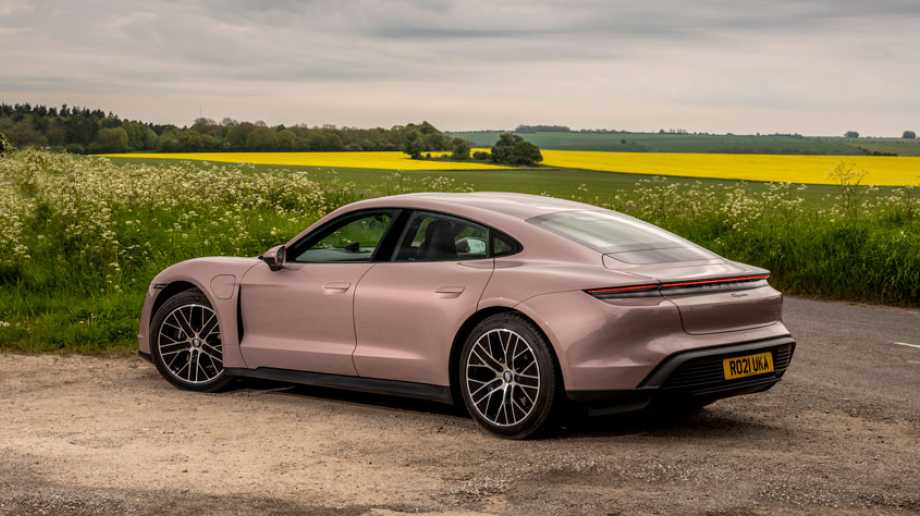 The Taycan is Porsche’s first all-electric production model, and Richard Gooding finds that it sets a high bar for cars offering a blend of luxurious comfort with an engaging driving experience

‘Performance’ EVs aren’t usually a GreenFleet staple, but as more and more car manufacturers are launching electric vehicles, their appearance is perhaps an inevitability. Porsche’s family of sports cars are beloved with drivers – even fleet drivers that may own one as a weekend toy – who prize driving enjoyment. Numerous attempts at practical, four-door Porsches have been made in the past, but it was the Panamera – and the Cayenne SUV before it – which brought more passenger-carrying ability to the German marque.

Hybrid versions of that car have been available since 2011, but the Mission E concept of 2015 first promised a vision of an all-electric production Porsche. The Taycan debuted in 2019, its four-door body and technological 800V architecture largely unchanged from the Mission E concept. Offered in five trim levels – including the iconic Porsche Turbo, even though it doesn’t actually use one – the Taycan is structured in two basic specifications determined by the battery. Performance Battery and Performance Battery Plus options come in different capacities, mated to either rear-wheel drive, single motor, or all-wheel drive, twin-motor powertrains of varying power configurations.

In addition to the four-door sports saloon bodystyle, a five-door Sport Turismo ‘estate’ is also available, as well as a Cross Turismo version, which is basically the same car but with more off-road ruggedness suited to the occasional venture onto more irregular terrain. The entry level, rear-wheel drive Taycan is tested here.

Even though the entry level model of Porsche’s four-door zero emission sports saloon has powerful performance, that doesn’t come at the expense of range. As tested, the 93.4kWh (83.4kWh usable capacity) lithium-ion battery of the Taycan Performance Battery Plus gives an official combined 301 miles of range. The smaller 79.2kWh (71.0kWh usable capacity) unit of the Performance Battery version can travel an official WLTP-rated 264 miles on a full charge.

With sporting performance long being a Porsche trademark, it seems fitting that the Taycan was one of the first electric cars to use more powerful 800V charging technology. The Taycan Performance Battery Plus can charge at a maximum of 270kW, which means that a five to 80 per cent charge takes only 23 minutes. Even though the smaller battery is rated at 225kW charging capacity, it takes the same time to reach the same level of charge. Porsche quotes a 0 to 100 per cent battery charge time of nine hours when connected to a 9.6kW AC electrical supply.

The Taycan has two charging ports. On the driver’s side is an AC Type 2 socket; an AC/DC Type 2 CCS Combo socket sits on the passenger side. The car also has an 11kW AC on-board charger, as well as a 50kW DCD on-board charger for 400V public charging stations. Cables for domestic and industrial sockets (230V, 32A) are also provided, as is a Type 2 lead.

Energy recuperation harvests kinetic energy to feed it back into the battery for extra efficiency. When the accelerator pedal is released, Porsche says the Taycan is designed to roll or coast as far as possible. Recuperation only takes place when the brake pedal is pressed. With two settings, it works well.

There’s no mistaking the Taycan for anything other than a Porsche, as it looks a little like a stretched 911. At just under five metres long, it’s a big car, but its low height makes it look purposeful, even in the unmistakable £774 Frozen Berry paint finish of our test car. Sleek and sporty, the Taycan creates an impression.

Inside, that impression continues. Ahead of the driver is a 16.8-inch, fully configurable curved digital instrument display, which also includes additional external touchscreen control panels for controlling functions for the lights and chassis. The centre console also includes a touch-sensitive display to control the climate control and the operation of the charging port doors. Another 10.9-inch screen sits above that, which can display smartphone mirroring functions.

Snug and of very high quality, the Taycan’s interior will most comfortably seat only four passengers. There is 407 litres of luggage space behind the rear seats (in the separate boot, there is no tailgate), with an additional 84 litres under the bonnet.

Even though the rear-wheel drive model is the entry point to the Taycan family, its performance is more than in keeping with the Porsche badge. It gets to 62mph from rest in 5.4 seconds, with a top speed of 143mph. Both batteries have the same performance figures, even though the Performance Battery Plus version has 469bhp compared to the Performance Battery car’s 402bhp (overboost maximum power with Launch Control figures). The 263lb ft / 357Nm of torque is plenty and the Taycan’s pace is as quick as you’d expect and want it to be.

With the Porsche badge on its nose, if the Taycan didn’t deliver on the driving front it would be a missed opportunity. Thankfully it does, and then some. In single-motor, rear-wheel drive form, the car feels ‘pure’ and unfiltered, the steering sharp and communicative, and the Taycan can be placed exactly where you want it. Damping is superbly judged – ideal if you’re a chauffeur and have to keep rear seat passengers happy – and the tied-down, almost balletic feel belies the big Porsche’s 2,050kg weight.

The most efficient setting is ‘Range’, which limits speed to between 56 and 87mph, with the car’s cooling air flaps and rear spoiler set to minimum drag, while certain power ancillaries operate at their most efficient configurations. A two-speed gearbox cleverly balances performance, and efficiency at cruising speeds.

The 617bhp Taycan Turbo costs from £117,500 and comes with the Performance Battery Plus battery as standard, along with 20-inch alloy wheels, front and rear heated seats, Porsche 4D chassis control and Porsche Surface Coated Brake discs.

As with all electric cars, the Porsche Taycan is exempt from VED charges in the first and following years of registration. The big electric saloon also attracts a two per cent Benefit In Kind (BIK) value under current 2022-2023 company car taxation rates. The same value also applies to the following 2023-2024 and 2024-2025 years.

The Taycan is one of Porsche’s most successful models. In 2021, the UK was the third biggest market for the car, with 30 per cent of new Porsches – around one in three – being the Taycan. In Europe, around 40 per cent of Porsches delivered in 2021 were electrified: either plug-in hybrids or all-electric models.

If you are a fleet driver who is lucky to have maneuvered yourself to a position where you can run a car such as the Taycan, there is little else which offers the driving appeal and experience that the spacious Porsche saloon does. With plentiful on-board technology and comfort to escort business passengers in luxury, the Taycan is an executive express with a long-range capability that can munch the miles just as well as it can devour them on a twisting road.