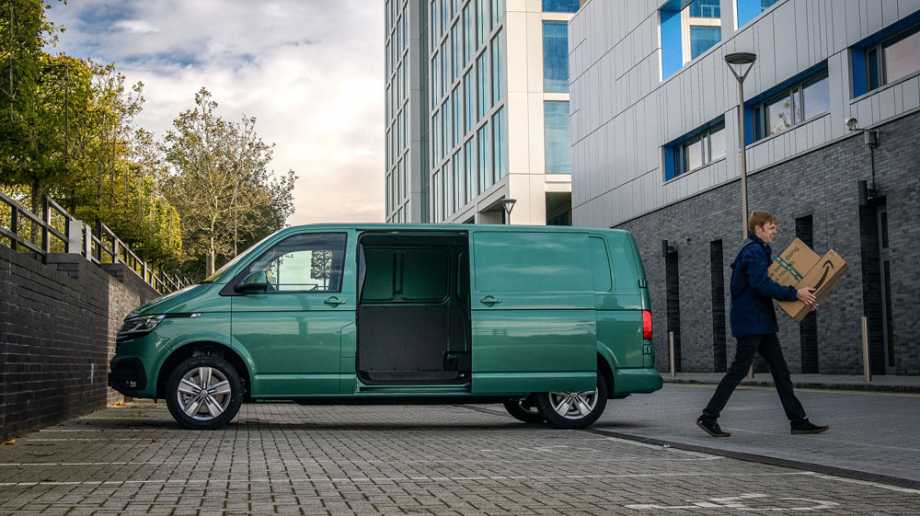 A solid first effort, Richard Gooding finds the ABT eTransporter 6.1 combines the best parts of the popular Volkswagen Transporter with all the benefits a zero-emission LCV brings

ABT is a company with a rich engineering heritage and has developed numerous systems for global automotive brands. The last decade has seen it develop a variety of e-mobility projects, and its ABT Sportsline sporting division has been competing in Formula E since it began. It won the manufacturers’ title with Audi in 2018.

How practical is it?
Four versions of the emission-free Volkswagen Transporter 6.1 are available, two panel vans and two kombi crew vans. All share the same 5,304mm length, 3,400mm wheelbase and 1,990mm height, as well as a 6.7m3 load compartment area. This is identical to the ICE-engined Transporters thanks to the eTransporter's battery being mounted under the load floor, behind the front axle.

All eTransporters are based on the long wheelbase model of the standard van, and can carry up to three Euro pallets. A maximum load height of 1,410mm and a maximum load length of 2,975mm should mean that most, if not all, loads can be easily accommodated. The second row of seats on the kombi is totally removable, and payloads start at 877kg on the kombi, up to 996kg on the panel van.

A nearside sliding door is standard, with an offside opening optional. Electrical operation is also available at an extra cost. For true loading versatility, a tailgate or rear wing doors can be specified, the latter available with 250-degree opening angle hinges. The load area itself has standard folding lashing rings for tying down cargo, as well as a full height steel bulkhead.

What range does it have?
Volkswagen claims an official range of 82 miles on the WLTP test cycle. That's on a par with other large vans such as the Renault Master Z.E, but much less than the 143 miles offered by the 50kWh Vauxhall Vivaro-e. The 75kWh Vivaro-e can travel even further – up to 205 miles on a single charge.

How long does it take to charge?
The eTransporter supports DC charging up to 50kW, so plug it in to a fast charger and the battery will be refilled to 80 per cent capacity in just 45 minutes. On a 7.2kW AC connection, a full charge takes around five and a half hours.

How does it drive?
Only a pair of 'ABTE' badges differentiate the eTransporter from its ICE-engined relatives on the outside. Even the charging flap is the door which would usually hide the diesel filler cap. Inside, there is little variation, too, with only the DSG gearshifter and the instrument dial 'Charge' and 'Ready' markings being the subtlest of changes. That's good, though, as the standard Transporter's cabin is a good place to be, with its dashtop stowage cubbies, an illuminated glovebox and cup holders. The 6.5-inch colour touchscreen infotainment system has sharp graphics and clear menus and is as good as that found in Volkswagen passenger cars.

On the move, there's a fair bit of whine from the eTransporter's electric motor, which is where the engine would normally be, but it's ultimately less intrusive than a diesel. A version of VW's DSG automatic gearbox controls the electric motor. When 'D' mode is selected, 75 per cent of the motor's power is delivered to maximise range, with 100 per cent power and torque provided with the 'kickdown' function. The 148lb ft (200Nm) of torque propels the eTransporter at a sprightly pace, and there's more than enough power for nipping in and out of traffic. As on an electric passenger car, regenerative braking recovers energy to top up the battery.

Light steering allows the eTransporter to be placed accurately on the road, and it is easily as comfortable as the ICE-engined versions, which should be of little surprise as it is essentially the same. The suspension absorbs lumps and bumps very well, and the added refinement brought by the electric powertrain is welcomed, and makes the eTransporter a calming mobile office in which to work.

What does it cost?
The UK government’s Plug-in Van Grant (PiVG) will contribute 35 per cent of the purchase price on all eTransporters, up to a maximum of £6,000. The eTransporter 6.1 range starts at £44,461 'on-the-road' including VAT with PiVG deducted for the entry level panel van. Well-equipped, air conditioning, heated seats, a multifunction steering wheel, a 6.5-inch touchscreen infotainment system with SD card slot, Bluetooth and USB-C connectivity, as well as a high level of driver assistance systems are standard. The £48,421 eTransporter Advance has more exterior style with colour-coded bumpers and 17-inch alloy wheels, as well as auto lights and wipers, LED headlamps and front and rear parking sensors.

The eTransporter kombi crew van is priced from £49,639 'on-the-road' including VAT and PiVG, rising to £53,971 for the more luxurious kombi Advance.

The VW eTransporter needs servicing annually, or every 24,900 miles, with an extended inspection due after 36 months (74,500 miles). Volkswagen's bespoke servicing plan for the eTransporter is priced at £399, and includes three services, an MOT, and brake fluid and pollen filter changes.

Why does my fleet need one?
Perfect for the growing last-mile delivery market as well as inner-city courier services, the eTransporter is afforded unrestricted access to the London Ultra Low Emission Zone and Clean Air Zones. Very well-engineered as it is, the eTransporter does feel more like a conversion (which it essentially is), rather than a fully fledged official manufacturer effort. That will come with the imminent ID Buzz Cargo (see panel) which will hopefully also add a more useful range.

However, fast charging compensates for that smaller electric range, and a huge wealth of passenger car technology and safety systems help make the eTransporter a comfortable electric commercial. Volkswagen's high level of build quality also lifts the eTransporter. If you want a reliable, very safe and well-equipped e-LCV, the electric VW will definitely fit the bill.