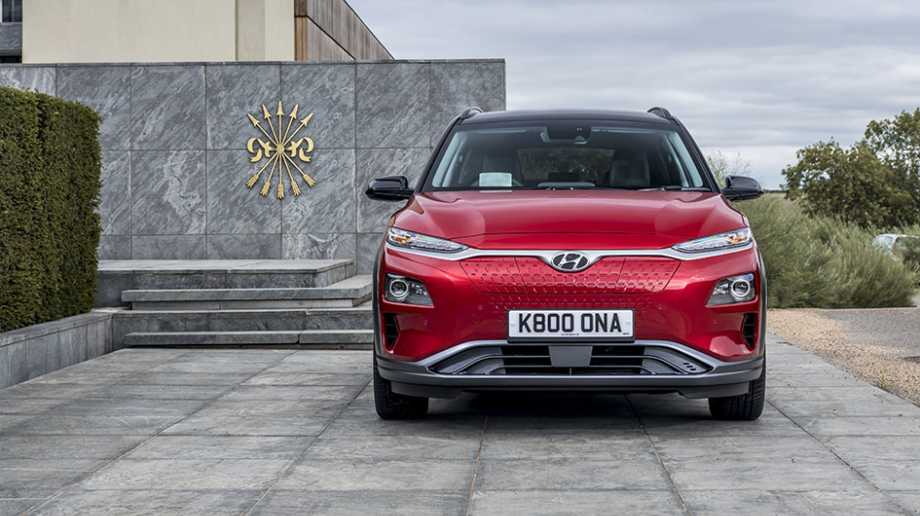 The Hyundai Kona Electric is the first EV to bring a near-300 miles of range to the affordable end of the electric car market. Richard Gooding finds very few flaws

Entering the fiercely-competitive SUV sector, the Hyundai Kona is a sub-compact SUV from the South Korean company.

Distinctive to look at, and launching with a range of 1.0 and 1.6-litre direct-injection petrol and diesel engines, the Kona debuted in 2017.

The all-electric version opened for order on 2 August 2018, with a choice of 39kWh and 64kWh battery capacities. It’s the more powerful car which is tested here.

Through its long-established Sante Fe and Tucson models, Hyundai has strong SUV pedigree and it shows in the Kona. While its appearance may be challenging to some (especially at the front), there’s no mistaking Hyundai’s first compact SUV for anything else.

All-electric Konas differ from their combustion-engined sisters by way of a blanked-off grille, more aerodynamic wheels, and reshaped bumpers. Hyundai has satisfactorily resisted the temptation to go too avantgarde with the styling of the electric Kona, which is a good thing: subtlety is the welcome key here.

Inside, owners of Ioniq models will feel at home, and while the general fit and finish is excellent, some of plastics belie its price point.

Overall, though, conventionality is the watchword. Hyundai has made the Kona as easy to live with as its combustion-engined counterparts, and it’s all the better for it, with little to distract and learn.

On the move, as you may expect, the Kona Electric is a comfortable and quiet companion. With 291lb ft / 395Nm of instant torque, it’s a speedy one, too, the 64kWh car reaching 62mph from rest in just 7.6 seconds.

It also feels fleet of foot, even though the electrically-powered Hyundai is around 300kg heavier than its diesel relatives. But with a pleasant weight to its steering and compact dimensions, it’s easy to thread through urban areas, while its turn of speed and range enables it to survive out of it.

The single-speed gear and drive modes are selected by a range of buttons on the centre console, while the three-stage regenerative braking can be managed via paddles either side of the steering wheel, which make it an intuitive process.

On the most severe setting, the Kona can be brought to complete stop, bypassing the brakes entirely and taking more stress out of driving. It’s all very intelligently thought out, also helped by the infotainment system’s range indicators and economy information.

The world’s first all-electric compact SUV sets the benchmark high with a 279-mile range from the 64kWh version.

Hugely impressive and enough to almost entirely banish range anxiety, the range is close to many combustion-engined rivals. Even the 39kWh version boasts an official 180 miles, which undoubtedly reduces some of the stress of electric motoring.

Both models make all-electric driving less of a challenge to the point you forget you’re driving an electric car.

Able to charge using the rapid charging 50kW DC network, the Kona Electric 64kWh takes just 75 minutes to get to 80 per cent capacity, dropping to 57 minutes for the 39kWh car.

On a domestic three-pin 10A electricity supply (Hyundai states for ‘emergency use only’), 64kWh Konas take 31 hours from flat to 95 per cent full. Lower-powered versions drop that to 19 hours.

Both models are aided by a 7.2kW on-board charger, a battery heater, and a heat pump.

Sold in three equipment grades, the Kona Electric SE starts things off at £27,250 including the government’s £3,500 Plug-in Car Grant (PiCG).

The range-topping Premium SE has electric and heated front seats, a heated steering wheel, LED headlights, and part-leather upholstery. Only available with the more powerful battery and motor combination, Premium SE Kona Electrics are priced from £35,145 once the PiCG has been deducted.

The GreenFleet Electric Vehicle Manufacturer of the Year 2018, Hyundai has an enviable problem with the Kona Electric. The company’s most eagerly-awaited car ever, it’s easy to see why.

Part of the Kona Electric’s appeal is that it looks near-identical to its non-EV siblings, but the biggest selling point is that hard to ignore range-for-price factor.

Add in lots of standard kit, an easy and enjoyable driving experience, and it’s easy to see why the Kona Electric is being hailed as a ‘game-changer’.

At a stroke it moves the affordable EV game on at some pace, offering Tesla-like range for less than half the price. It’s both a very enjoyable and impressive car, and sets the bar high for affordable personal electric transport.