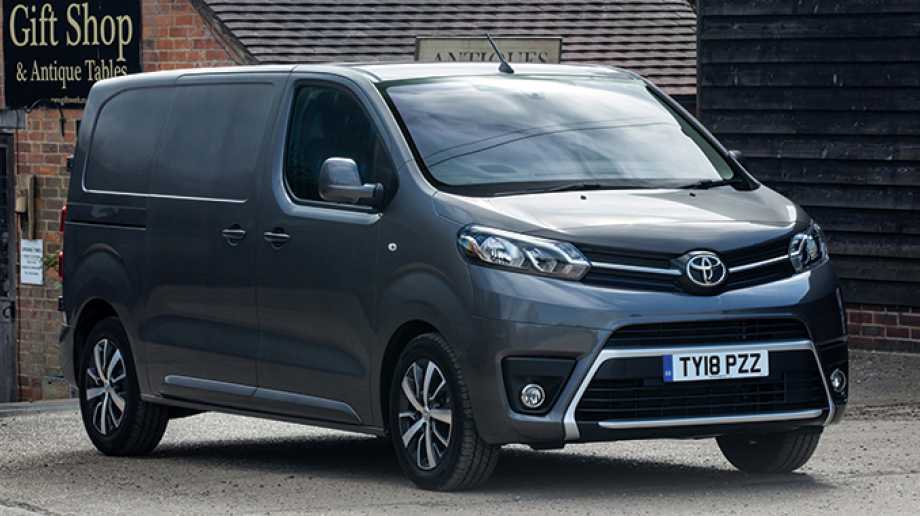 Think ‘Toyota’ and ‘commercial vehicle’ and the ever‑dependable Hilux will invariably spring to mind. The 51-year-old flat-bed pick‑up is somewhat of a rugged light commercial icon, and has a cult following even from those who don’t drive one day to day. And although Toyota may be more synonymous with hybrid technology and the Prius rather than with commercial vehicles, it does produce a more practical LCV. Step forward the Proace. First launched in July 2013, the first‑generation Toyota Proace was a rebadged Citroën Dispatch / Peugeot Expert / Fiat Scudo. The PSA Group and Fiat joint venture ended in 2016, when the newest versions of the French vans were unveiled (GreenFleet, issues 96 and 98). Stepping into the Italian carmaker’s shoes this time around, the third project partner is Toyota, whose Proace is built in the same factory as the French pair. It’s a similar set-up to the Toyota Aygo / Citroën C1 / Peugeot 108 trio: the same mechanicals, hard points and interior, providing all three manufacturers with a package on which to place a body. Similarly to its French sisters, the Toyota van is available in three lengths – ‘Compact’, ‘Medium’ and ‘Long’, the latter pair with a longer 3,275mm wheelbase – and four body styles: panel van, crew cab, combi, and platform cab. Lengths start with the 4.6m ‘Compact’ model and rise through ‘Medium’ 4.95m variants to the longest 5.3m ‘Long’ version. The Compact model offers a maximum payload of 1,000kg and aims to ensnare business users who find room in smaller vans lacking. Medium – as our test van – and Long versions feature load capacities of 5.3 cubic metres and 6.1 cubic metres respectively, while the Compact manages 4.6 cubic metres. The larger vans accommodate a trio of Euro pallets, while the smallest version swallows one fewer. All second-generation Proaces have a standard height of 1.9m to enable them to enjoy maximum manoeuvrability through often height‑restricted urban landscapes. Maximum payload capacity is 1,400kg for the Medium and Long versions while a passenger-carrying Proace Verso MPV‑style version is also available. Being based on the latest PSA Group vans, the Proace’s shared heritage is clear, but Toyota has added its distinctive ‘X’ face to its light commercial.

The length of the loading area on the Toyota Proace Medium is 2,512mm, but add in the Japanese carmaker’s ‘Smart Cargo’ load‑through bulkhead system – standard on Comfort versions but £250 extra on the ‘Base’ entry‑level grade – and this increases to 3,674mm, and takes the load capacity up to 5.8 cubic metres. The width of the side door opening is 935mm on Medium-length Proaces, with a 1,200mm height.  The standard 50/50 rear doors swing out to 180 degrees, while the maximum load width between wheel arches is 1,258mm). A tailgate is a £175 option on selected Comfort-spec models.

Based on the new PSA Group’s EMP2 platform which underpins models such as the Peugeot 2008/3008, the latest Toyota Proace features many car-derived technologies. While the rear end of the new French/Japanese joint light commercial is bespoke LCV, the front of the new subframe is developed from the French group’s passenger cars. One bonus this brings is the use of the latest Euro 6 engines. Just as with the French offerings, 1.6‑litre and 2.0-litre units are offered, but with outputs ranging from 93bhp to 117bhp. The cleanest version is the one on test here, the 113bhp 6-speed manual, which emits 137g/km. Toyota claims economy of up to 54.3mpg on the combined cycle, the lowest of the three engines available. We achieved an impressive 50.2mpg, the Japanese commercial easy to glean decent economy figures from. All the Toyota’s Proace powertrains meet Euro 6 emissions standards and feature a selective catalytic reduction (SCR) system to reduce the amount of NOx released into the atmosphere. A 22.5-litre tank of AdBlue ensures the system will work to its optimum capability for around 9,300 miles (15,000km). The tank can be refilled via a filler inlet on the B-pillar, which can be accessed when the driver’s door is open. Stop/start systems are standard on all models bar the 93bhp variants, while servicing intervals are 25,000 miles or two years. Toyota’s five-year / 100,000‑mile pan-European mechanical warranty is standard, too.

As you’d expect from a part-car-derived chassis, the second-generation Toyota Proace enjoys many car-like traits on the road. At a cruise, the Proace is impressively refined when cruising, engine noise only head when accelerating. As with many modern systems, the power‑assisted steering lacks feedback, but we suspect many drivers will like the well-weighted feel which will make light work of the 12.4m turning circle. The 113bhp diesel is equally at home in urban and motorway situations, its 221lb ft / 300Nm giving plenty of acceleration. The six-speed manual gearbox enjoys positive shifts. The MacPherson-derived front suspension system serves up more car-like feel and makes for failsafe but enjoyable handling with a very comfortable ride. Parking the Proace is easy, although parking sensors or a rear view camera should be standard, and the Proace isn’t alone in this regard. The interior has a less commercial vehicle‑like ambience, too. The three-seat cabin has lots of space for legs and heads, and there myriad handy storage cubbies: two drinks holders atop the dashboard, a dash‑top cubbyhole, and door pockets, but sadly no overhead shelf, unlike some rivals. The overall cabin architecture is identical to its French relatives’ bar a rebranded seven‑inch colour touchscreen infotainment system. And that’s no bad thing, as the fit and finish is very passenger car-like, too, and the optional Pro Touch satellite navigation system looked good and worked well. A rosta of trip computers in the instrument binnacle measure fuel economy and distance travelled, and are useful in every day use.

The 2018 Toyota Proace range starts at £20,037.67 (commercial vehicle ‘on the road’ price minus the reclaimable VAT) for the 93bhp Base Compact Proace, while the Medium grade models kick off at £21,262.67 for the smallest version. Comfort Crew Long vans begin at £26,558.51, while Platform Cabs start at £22,004.34, with the Combi nine-seater available from £23,590.17. The latter two models can only be chosen in Medium length. All Proaces get twin side sliding doors, electric mirrors, remote central locking and DAB / USB / Bluetooth connectivity as standard. All versions bar the Base-trimmed models feature manual air conditioning as standard. Toyota’s comprehensive ‘Safety Sense’ safety system is on offer at £1,900, but includes pre‑collision and adaptive cruise control systems, a useful and clear head-up display, cornering lights, auto headlights and wipers, an auto-dimming rear-view mirror, a seven-inch Toyota Pro‑Touch infotainment screen, an alarm, a coloured TFT screen ahead of the driver as well as upper dashboard storage. A ‘Premium Pack’ as fitted to our test van consists of 17‑inch alloys, and the seven‑inch Pro-Touch screen with navigation, at a cost of £1,250.

As with its PSA Peugeot Citroën sisters, the Toyota Proace has taken a leap forward in both usability and comfort, and with the sheer number of versions available, there should be a Proace for every driver and every need. The car-derived technology lifts the Proace away from the sparse image vans enjoyed in the past, and the latest efficient and modern engines promise good fuel economy and are more than sufficient for everyday driving situations. Improvements in practicality and interior quality only heighten the Toyota van’s fleet appeal. Toyota’s extensive network of dealers may swing the buying decision for some, but the Proace stands on its own merits and strengths, and offers car-like refinement and ease-of use which are to be applauded.