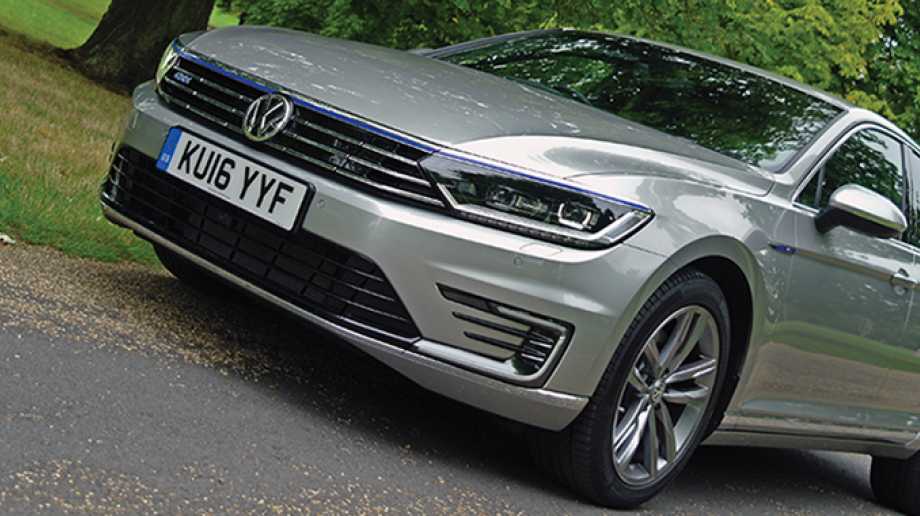 The Volkswagen Passat GTE promises low emissions with both performance and efficiency. Richard Gooding reports on whether this mid-sized car marriage of pace and parsimony is a happy one

Recalling a name associated with sports Audis of the 1970s and Vauxhalls of the 1980s, the Passat GTE is the plug-in hybrid version of Volkswagen’s large family car.

First announced in 2014 with the arrival of the current Passat, the GTE is the only petrol-powered model in the big VW’s line-up. On sale on mainland Europe since 2015 – and Sweden’s best-selling plug-in hybrid in March –  the 40g/km plug-in version of the German family contender only arrived in the UK in August 2016.

Like the Golf GTE which shares the electrified Passat’s ethos, the large Volkswagen is easily identified from its diesel siblings. Blue ‘GTE’ badges, callipers, and exterior trim signify the hybrid‑powered model, along with C-shaped daytime running lights, and a subtle pop-out charging flap in the front grille.

On start-up, the first thing you notice is that the lack of a diesel soundtrack and for a car of this size, at first, that’s a little unusual.

The Passat GTE is powered by a turbocharged 154bhp 1.4‑litre petrol engine mated to a 83kW/112bhp electric motor, for a combined system output of 215bhp and 400Nm/295lb ft of torque.

In hybrid mode, the car seamlessly shuffles the sources of power as to how it thinks is the best way to use it. Volkswagen quotes 31 miles of pure electric range, and once the 9.9kWh battery is depleted, the car will automatically switch into hybrid mode.

Power is transferred by a six-speed DSG gearbox, and, as with other Volkswagen Group cars, it’s all done very smoothly. A Tiptronic mode can be used for sportier shifting, and is augmented by the steering wheel-mounted paddles.

Normal ‘D’ Drive mode changes gear like an automatic, while ‘B’ mode uses regenerative ‘engine’ braking and changes up and down the box automatically. It can be jerky in stop-start traffic, though, as the car surges forward with a little too much verve after being at rest.

Of course, the Passat GTE’s supposed trump card is it offers performance as well as efficiency. The spirited performance certainly bares the first element of that equation out, the saloon dispatching the 0-62mph dash in 7.4 seconds.

Four driving modes offer more tunability. Full-electric ‘E-Mode’ is the default setting in which the car starts, switching into ‘Hybrid’ once there is no remaining battery charge. The car then uses the petrol and electric motors and required and also replenishes the battery under deceleration.

Choose ‘Battery Charge’ to conserve battery power for electric running in urban areas, but beware that fuel economy can suffer as more charge is put back into the battery. If full ‘GTI’-type performance is needed, the ‘GTE’ mode uses both the petrol and electric motors together to deliver a more sporting‑focused drive.

It’s effective, too, as the engine becomes more vocal, the steering becomes stiffer, and the gearbox ratios are altered to give a faster pace. A ‘Sport’ mode in the driving mode menu also does a similar thing, without the theoretical fuel economy deficit when the car is displaying its ‘GTE’ personality.

Whichever mode is chosen, though, the Passat GTE is very smooth to drive and largely enjoys the same refined demeanour as its diesel siblings. The suspension is firm but largely comfortable and it’s a well‑appointed and enjoyable machine to drive, even if agility suffers a little thanks to a 110kg weight penalty over the equivalent diesel.

Charging time is 4 hours and 15 minutes from a domestic mains supply, which drops to just over two‑and-a-half hours from a 3.6kW wallbox. The Passat GTE comes with both a 16A AC cable for wallbox/public network charging, as well as a 10A mains cable for home charging.

Volkswagen quotes an official fuel economy value of 166mpg for the Passat GTE, which like many plug-in hybrid values, seems a little on the unrealistic side.

However, as we found with the Mitsubishi Outlander PHEV, systematic and consistent use of charging – either at home or on the public networks – pays dividends as relatively high values can be achieved.

While our ‘real-world’ average of 105.6mpg over a 488-mile test still takes some believing, it’s worth noting that the plug-in Passat can deliver economy as low as 35.1mpg when the 1.4-litre TSI engine is solely being used, with values as high as 277mpg over short distances when both electric and petrol powertrains are employed in conjunction with a gentle right foot. Volkswagen quotes a total NEDC cycle driving range of over 664 miles.

Myriad displays inform of what’s going on when, and ‘E-Mode’ brings charge and consumption meters, while ‘GTE’ mode makes the rev counter even larger when the Active Info Display digital dash option is fitted.

Similar to the just-revised Golf GTE, VW has created a two-model range for the Passat GTE.

The entry level ‘GTE’ saloon costs £37,015 ‘On The Road’ (OTR) excluding the government’s Plug-in Car Grant (PiCG) of £2,500 for vehicles which emit less than 50g/km of CO2 and have an electric-only range of between 10 to 69 miles. The Passat Estate GTE attracts a £1,600 premium over its four-door counterpart.

When it comes to the higher-specification ‘GTE Advance’ models, prices kick-off at £40,670 OTR minus PiCG for the saloon, rising to £42,270 for the estate.

A three‑year subscription to the ‘Car-Net Guide and Inform Plus’ system is also included and provides access to a range of internet-based services.

Top‑rung cars also gain ‘Area View’, which gives a 360-degree exterior view of the car via the central touchscreen, which is upgraded to the eight‑inch Discover Navigation Pro system.

Before the realigned VED band structure was introduced on 1 April, the Passat GTE slotted into Band A – £0 – the lowest rate available, but with the new system, the first-year rate of £10 applies for both the entry-level ‘GTE’ and higher-specification ‘GTE Advance’ models.

Meanwhile, the higher £40,000-plus price of ‘GTE Advance’ cars means they will be charged a massive £440 annual ‘premium rate’ cost. After five years, this higher cost will revert to the lower £130 standard rate.

The new ‘premium rate’ of VED applies to all cars with a list price £40,000 and upwards, regardless of emissions.

Traditionally, the mid-size saloon sector has favoured diesel engines, but the Passat GTE bucks that trend (even though the rest of the range conforms to that tradition).

Yes, it’s expensive, but what the GTE does is offer a variety of driving configurations to suit an individual’s needs. Because of the hybrid powertrain, range anxiety simply doesn’t exist and if your average day’s driving takes in a distance less than 30 miles, the pull of constant zero-emissions motoring may well be strong.

There’s also the lure of the full‑fat ‘GTE’ performance mode.

But, just as with other plug-in hybrids, if your average driving pattern consists of longer journeys, you’ll see few of the Passat GTE’s electrified benefits and will be better off with a diesel model.

The introduction of the new VED rates, has eroded some of the low emission tax benefits, too. But, technologically, the Passat GTE is a plug-in hybrid triumph which may prove enticing enough for those who desire a low emission, beautifully‑built and spacious electrified car with very few drawbacks.