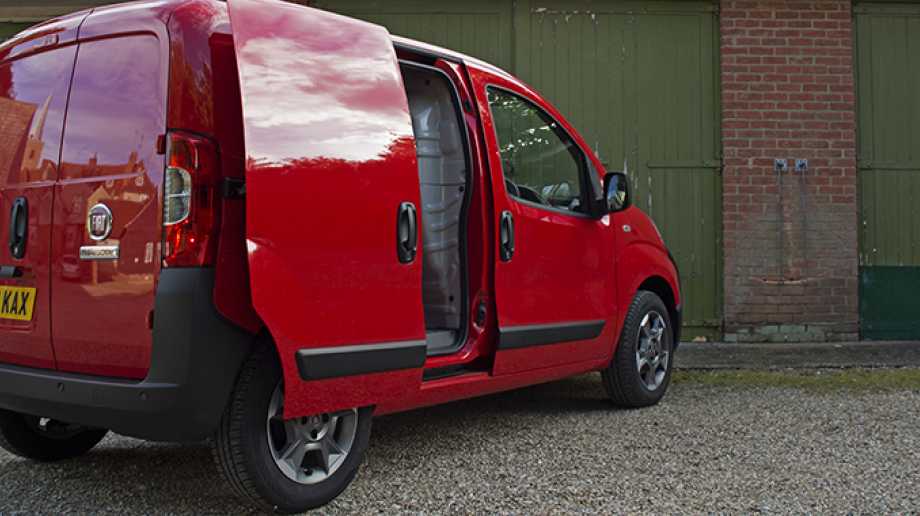 Recently revised, the Fiat Professional Fiorino now has a smarter appearance and cleaner Euro 6-compliant engines, but enjoys the same practicality as before. Richard Gooding delivers the verdict on the urban warrior from Italy

The smallest light commercial in Fiat Professional’s range, the current Fiorino is the third-generation of a van which has been around since 1977. First based on the Fiat 127 and then the Fiat Uno, the small car-based commercial gained a new ‘Fiat Small’ platform in 2008.

Jointly-developed with the PSA Group, the Fiorino has light commercial siblings from Citroën (Nemo) and Peugeot (Bipper) which share both its Fiat Grande Punto‑derived chassis and rounded-corner bodywork.

All of the trio also offer passenger-carrying versions, too, and are built by Tofaş in Bursa in Turkey. Revised in mid-2016, electric and CNG Natural Power gas versions of the Fiorino are also available, but sadly not in the UK.

Very, for a small commercial. The Fiat Professional Fiorino has a maximum volume of 2.8m3, which can be accessed by a sliding door on the nearside of the van, while at 1,046mm, the load bay is wide enough to take a Euro pallet.

The asymmetric rear doors have 180-degree openings and all feature well-thought out vertical handles to ease loading.

Maximum payload capacity is 660kg with the driver on board, while a 9.95-metre steering angle helps thread the little load carrier though congested streets. The interior features a number of storage cubbies perfect for urban deliveries, while a panelled bulkhead is a £150 option.

With CO2 emissions from 100g/km when fitted with Fiat’s robotised gearbox and £200 Eco pack with stop/start, the cleanest version of the Fiorino range is the ‘EcoJet’ variant of the 1.3 Multijet 2 80.

And while a non-diesel, potentially more NOx-friendly version of a light commercial at this end of the market is somewhat of a unusual move, the Renault Kangoo Z.E. offers more of an environmentally-friendly option for those with an eco conscience.

As may be expected due to its car‑derived underpinnings, the Fiorino is very car‑like to drive. All the controls have a nice well‑weighted feel, and the five‑speed manual gearbox shifts positively.

The spritely small-capacity Multijet 2 80 engine is a good match for the little Fiat Professional commercial, and its 200Nm/147lb ft of torque makes it easy to zip into tight gaps around congested urban areas.

With little body roll, light power steering and a sub-4.0‑metre length, the Fiorino is enjoyable to drive, although the ride is a little on the firm side.

It’s refined, though: only under acceleration does the diesel engine make itself vocal – the rest of time you could be forgiven that there was a petrol engine sitting under the Fiorino’s stubby nose.

In the cabin, only the cheap-feeling and looking plastics hint at the fact the Fiorino is a light commercial.

The five-inch colour touchscreen infotainment system works well enough, but in truth is a little small, but a USB port enables smartphones to tablets to be charged on the move. The seats are comfortable, and the Florino’s driving position is generally good.

The view out of the windscreen is almost panoramic, though, as with most vans, rear visibility is greatly reduced, so £150 rear parking sensors are one essential option.

For security, the cab and the load bay can be locked separately. An alarm is a £150 option, though.

The entry-level Fiat Professional Fiorino powered by the 75bhp 1.4-litre ‘Fire’ engine has a basic price of £11,415 minus VAT and other ‘On The Road (OTR)’ charges.

The mid-range SX version on test retails at £12,765 excluding VAT and OTR charges, and is both cleaner and a little more powerful.

The extra cost gains cosmetic improvements such as the ‘Ultrashine Silver’ finish to the front grille and bumper, as well as practical touches like electric windows, electrically‑adjustable and heated door mirrors, a sliding side door, steering wheel-mounted radio controls, a five-inch touchscreen infotainment system with Bluetooth connectivity, as well as deadlocks for additional security.

Practicality can also be enhanced by an offside sliding rear door (£230), while safety can be improved a panelled bulkhead (£150), while our test vehicle was also fitted with £425 15-inch gunmetal‑coloured, diamond‑effect alloy wheels, which did lift the slightly front-heavy looks of the overall shape.

Both the Citroën and Peugeot model ranges offer just the one engine option, though, a PSA Group‑sourced Euro 6-rated 1.3-litre HDi diesel, with emissions of 115g/km.

Fiat Professional claims that the Fiorino is the leader in the market sector, and its certainly well-regarded in its home country, with Italia Post’s fleet numbering 3,000.

Cheeky in character, and enjoyable and easy to drive around town, the Fiorino offers peppy performance and a payload which should accommodate most small van drivers’ needs.

An updated cosmetic exterior appearance as well as a broader engine range are just two benefits the Italian light commercial enjoys over its Citroën and Peugeot cousins.

A number of lower-emitting variants increase offer an additional advantage, and with a larger loadspace, the Fiorino is also more practical than some car-based van rivals, too.