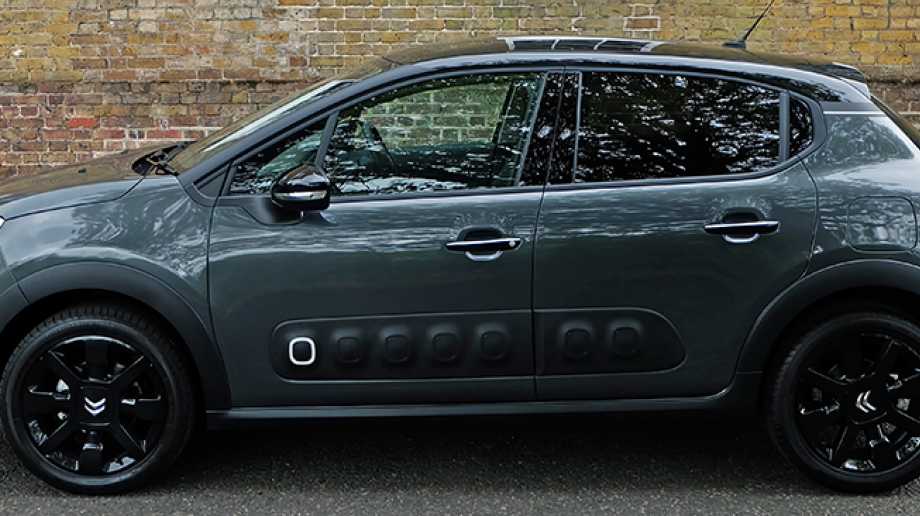 The original version of the C3 replaced the Saxo supermini in early 2002. With styling and a silhouette which referenced the 2CV, it spawned a similar but more modern‑looking replacement in 2009.

The current third‑generation model arrived in early 2017, and echoes the looks of the popular Citroën C4 Cactus which debuted the French car maker’s new high-set headlamp and high‑riding SUV-like design.

The C4 Cactus also introduced ‘Airbumps’ to the world, and the C3 also uses the polyurethane air-filled pockets as both a style and safety feature. Dropped into arguably the fiercest new car segment, the new C3 has a distinctive personality and a range of EU6-compliant petrol and diesel engines, none of which top 110g/km.

The C3’s unmistakable style continues inside. Airbump-shape imprints and controls litter the cabin, and the leather-strap-like door pulls lifted from the C4 Cactus continue the stylish theme.

There are also lighter-coloured door pockets and the central touchscreen infotainment system, which does away with any external buttons for the heating and air conditioning controls, which some may see as a backward step.

Overall, though, the C3’s interior is as avantgarde as its (five-door only) exterior clothes.

On the move, with a high seating position, the C3 feels like a mini-SUV. The non-sport, flat-looking seats are comfortable, a key aim for Citroën’s new small car. As part of the company’s ‘Advanced Comfort’ programme, the C3 is one of the first models to embrace the car maker’s new relaxed mantra.

To that end, the ride errs on the side of comfort, and the C3 absorbs lumps and bumps well, although the larger optional wheels on our test car did unsettle it over larger road surface scars. With a fair amount of body roll, it’s not the last word in driving enjoyment, but Citroën is confident of the C3’s more relaxed gait.

The 100bhp 1.6-litre four-cylinder diesel engine is spritely, and with 187.3lb ft (254Nm) of torque developed from 1,750rpm, has lots of mid-range punch. It suits motorways very well, and, playing its part in that ‘Advanced Comfort’ equation, is refined on the move.

The diesel C3 is an amenable cruising companion, too, but can be noisy under hard acceleration. It’s also gruff-sounding at idle, with some vibration felt through the pedals.

Citroën quotes an official combined cycle fuel consumption of 76.3mpg for the BlueHDi 100 S&S variants of the C3. We achieved a lower average of 61.2mpg over our 325-mile test, but that still scores as 80 per cent of the official figure, one of our better results. Our highest fuel economy reading was 70.5mpg.

The Citroën C3 range starts at £11,555 for the Touch PureTech 68 manual petrol model, and rises though Feel, Flair and range-topping Flair Nav Edition variants. At £17,925 before options, our test car sits at the top of the C3 Flair family.

As tested, the price was £19,970, thanks to a host of useful options which included a blind spot monitoring system (£100), Citroën Connect Nav seven‑inch touchscreen with Citroën Connect box (£500), keyless entry and start (£250), as well as a panoramic sunroof (£400).

As with many small cars and SUVs, personalisation is a bit part of the C3’s character, and the small Citroën can be had in nine exterior colours with a choice of three contrasting roof shades.

A total of 36 possible combinations give plenty of scope for drivers to create an almost unique C3, and with elements of the Airbumps (standard on Flair and Flair Edition, optional on Feel trims) also picked out in a pair of divergent hues, and a choice of two additional interior colourways, the small French car goes all out to be noticed.

Which, in a market sector which has seen a number of new entrants over the past 12 months, is essential.

Safety is high, too, with Coffee Break Alert, lane departure warning and speed limit recognition systems all as standard. There’s also cruise control as well as Citroën’s ConnectedCAM digital camera, which constantly films while the car is on the move.

If it senses that the car suddenly slows down, it automatically records a video 30 seconds before and one minute afterwards, to, in part, act as evidence in the event of an accident. A corresponding app also transmits the car’s GPS coordinates every time it is at a stop.

Aside from the Feel BlueHDi 75 S&S manual, the BlueHDI 100 S&S manual models are the cleanest C3s at 95g/km. Though the smaller-output car is rated at 93g/km, both this and the BlueHDi 100 S&S models sit in the same VED band and attract a first-year rate of £120.

When it comes to Benefit in Kind rates, the Flair BlueHDi 100 S&S is, at 21 per cent, in the top band of C3 BIK taxation. Other figures range from the 19 per cent of the PureTech 110 S&S manual to the higher value of our test car.

While diesel-powered small cars can have a limited appeal due to their higher list price, the reduced emissions offered equate to a lower first-year VED. The Benefit in Kind rates may be higher, but the fuel economy still eclipses that of petrol cars.

And despite what the media reports, Euro 6-compliant diesel engines are significantly cleaner than those which preceded them, and form little part of the now widespread condemnation of the fuel as a whole.

The PSA Group’s BlueHDi technology for example, combines oxidation catalysis, Selective Catalyst Reduction and a Diesel Particulate Filter with AdBlue to reduce NOx by up to 90 per cent. For now, the black pump still has its place.

But, with petrol technology closing the gap on diesel, new small-capacity turbocharged engines are, in some cases, almost as economical.

As a stylish and economical runabout, the new Citroën C3 scores highly. Its distinctive style might not be to all tastes, but there’s no denying it stands out in a class of extremely competent and competitive rivals.

Its design‑led cabin is both a comfortable and chic place to be, while it offers a neat compromise on space and practicality. Citroën has fielded an accomplished yet playful effort.

However, while there’s no denying that the diesel-engined C3 is part of a dying small car breed, (Citroën expects only 25 per cent of new C3s to have diesel engines under their stubby noses), the reductions in CO2 do still hold appeal to a select band of drivers. Even if that appeal is becoming slowly eroded.

Stoke-on-Trent City Council was one of the first organisations from the public sector to place a fleet order for the new Citroën C3.

Part of a 10-car order, six new C3s have gone into service in Stoke‑on‑Trent. The cars will be used to assist Stoke-on-Trent City Council team members working with vulnerable residents.

The fleet is finished in a wide range of colours, taking full advantage of the small Citroën’s bi-tone colour schemes, and on-board equipment includes satellite navigation for each car.

Each one of Stoke-on-Trent City Council’s C3s has been specified with an extended warranty, providing cover for five years/100,000 miles – the expected service life of the cars with the council, and the order follows two earlier fleet deliveries of Grand C4 Picassos and Relay vans.