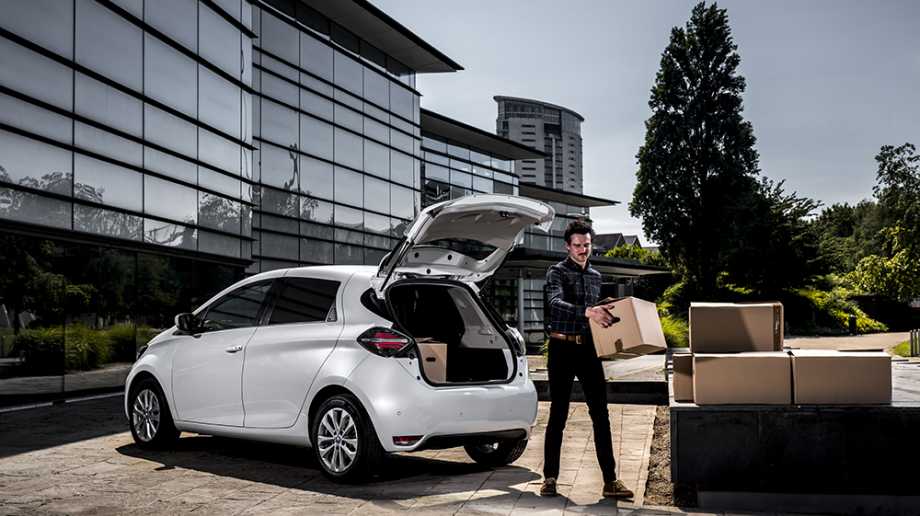 The choice in the mid-sized electric van market is set to expand hugely in 2021, but Renault Pro+ has seized upon the small commercial EV sector with its car-based Zoe Van. Richard Gooding discovers if it measures up

What is it?
In the 1980s and 1990s, van derivatives of small cars were rife, but over the past 20 years or so their numbers have dwindled. Ford still sells a van version of its popular Fiesta, but the converted small car commercial template has all but disappeared, replaced with a slew of small, but more practical, purpose-built LCVs. Renault has bucked the trend, though, and introduced what is perhaps an obvious idea: a van version of its successful all-electric Zoe. It's a startlingly simple solution and with the number of low and ultra-low emission zones only set to rise, it looks to be a perfectly timed answer to both last-mile and longer distance deliveries.

How practical is it?
Based on a small car, the Zoe Van obviously loses some ground to more purpose-built rivals, but Renault has still managed to give it 1.0m3 of load volume, with maximum payloads of between 435kg and 457kg (excluding driver) depending on version. The rubber-lined rear load deck is on a raised platform to meet the car's luggage area, and is mounted where the rear seats would be. The load bay has 1,205mm of length in the load bay with a maximum width of 1,110mm.

Four anchorage points tie items down and a mesh bulkhead protects the driver and passenger should any objects fly forward. An extended load cover is fitted in addition to the car's parcel shelf to cover items from prying eyes, and Renault has wisely left the rear doors as they are on the regular Zoe, enabling items to be loaded and unloaded through them, should the rear tailgate be inaccessible. The rear windows have been disabled, though, and have been covered with an opaque film.

How clean is it?
Based on the same mechanical and powertrain package as the Zoe passenger car, the Zoe Van is all-electric and therefore emits 0g/km of CO2.

What range does it have?
Renault uses tried and tested lithium-ion technology for its EV batteries, and the latest Zoe family now uses a unit with an energy capacity of 52kWh. That gives the entry-level Zoe Van a claimed official WLTP range of 245 miles, dropping to 239 miles for the top Business+ model tested here. Either way, it's an eminently usable distance, and we saw a recorded high of 222 miles on a full charge. Renault claims real-world ranges of 233 and 150 miles in summer and winter respectively, but even the lowest value should be more than enough for a day's deliveries.

As well as ranges the same as its passenger car relative, the Zoe light commercial also features technology such as a heat pump, pre-conditioning and regenerative braking to conserve battery energy.

How long does it take to charge?
Renault has fitted the Zoe Van with its Chameleon Charger technology which makes its electric LCV able to use various power sockets and sources. The van can be recharged at one of 11,000 nationwide public charging points, where a 22kW charger can refill the battery in as little as three hours. A 7kW connection, such as an office/home wall box, can fully refill the Zoe Van's battery in just under 10 hours.

Similarly to its passenger-carrying relative, the Zoe Van does without 50kW rapid charge functionality as standard. An odd omission, it is less of an issue than it could be due to the van's long range. However, it does seem strange in a vehicle which is likely to spend most of its time scooting around urban areas, with the welcome option of tackling much longer journeys than other electrified LCVs. Available for an extra £840, the Zoe Van Rapid Charge models can be refilled to 80 per cent in one hour and 10 minutes. Renault also claims that just 30 minutes of rapid charging will replenish 90 miles of range.

Nearest charge points can be found via Renault’s standard Easy Link navigation system, along with the My Renault Android/Apple smartphone app. When it comes to efficiency, we averaged 3.9 miles per kWh.

How does it drive?
Externally, the Zoe Van appears just as the Zoe passenger car. That's a good thing. The recent update gives the car – and therefore the van – a smart appearance, and the commercial also carries over the car's upgraded and near-premium-feeling interior. The seven-inch colour touchscreen infotainment screen sits in the centre of the revised dashboard and works well, with smooth transitions and the options of Android Auto and Apple CarPlay connectivity. Ahead of the driver is the same 10-inch customisable colour digital display as the regular Zoe, all of which makes time spent in the small commercial all the more pleasant and enjoyable.

As you may expect with a car-based van, the driving experience also differs little to the regular Zoe. Hushed on the move, the 'R110' 80kW (108bhp) electric motor gives brisk acceleration, suiting the van's urban use cycle perfectly. The only motor available on the Zoe Van, there's more than enough performance for everyday use. Renault claims the small LCV goes from 0-31mph in 3.9 seconds, which is useful performance in heavily trafficked urban areas.

Even though the rear end is 'open', there's very little noise from the load area. The same 'elasticity' in the EV powertrain is also present, and it's easy and fun to drive Around corners, the Zoe Van grips well, and its inherent agility and size makes it perfect for nipping in and out of the urban areas it is most likely to inhabit.

Brake regeneration can be increased by using the standard ‘B’ mode on the single-speed gearbox. It noticeably slows the van down to an almost stop at junctions and makes for simple ‘one pedal’ driving. An ‘Eco’ driving mode also helps eke out range, by minimising certain parameters of the van's performance and operation.

How much does it cost to tax?
As the Renault Zoe Van is all-electric, it is exempt from Vehicle Excise Duty and doesn't attract the standard light commercial vehicle rate of £265.

Why does my fleet need one?
A simple and perhaps obvious solution to urban deliveries, Renault's decision to turn its successful Zoe into a light commercial is a winning one. Delivering the same range, low running costs, comfort, and agility as the passenger car version, it is perfectly suited to a light commercial application.

Although it may be down on load volume when compared to more purpose-built small vans, with the many strengths from the car carried over, the Zoe Van is almost as an irresistible a choice as its passenger-carrying sibling. The same 100,000-mile/five-year  mechanical and eight-year traction battery warranties should also accelerate the small Renault van's appeal to fleet operators. The only question remaining is, what has taken Renault so long?